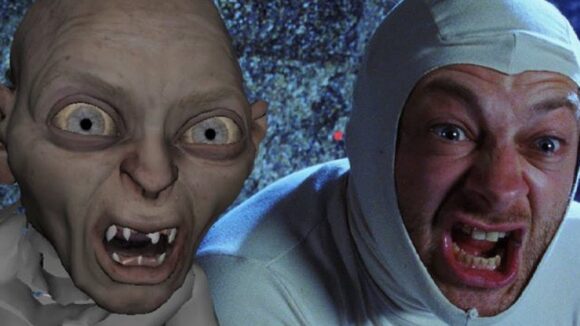 Wired published a video recently in which Andy Serkis managed to explain the development of motion capture without ever once mentioning the role of animators in the process.

This behavior is nothing new for Serkis, the actor who has performed animated characters such as Gollum, King Kong, and most recently Caesar in the Planet of the Apes franchise. He has been on a years-long public relations quest to convince the general public that he generates his animated performances entirely by himself. For anyone who even remotely understands the animation process, it is a blatant lie – one so preposterous that it has even been the subject of Youtube parodies.

At this point, the Serkis strategy is nakedly obvious: he believes that in order to be honored by acting peers, he must convince everyone that he is the sole author of animated performances. By extension, it means he must convince people that animators and digital artists play no creative role in the character creation process.

In the past, he has used false analogies, like comparing the work of animators to “digital makeup,” implying that animators only enhance/touch-up his performance in the manner of a traditional makeup artist, but don’t actually contribute to a character’s creation.

In the latest video, he goes one step further, completely eliminating animators from the film’s production process. Instead, he makes the bizarre new claim that animators are part of the post-production process, saying, “The task in post-production is always going to be that ability to take the actor’s performance and actually interpolate that performance, while also retaining it but also putting it onto the physiognomy of an ape.”

Both “digital makeup” and “post-production” are deliberate misrepresentations of what happens after Serkis pulls off his performance capture suit. Cartoon Brew, in fact, published an in-depth piece last summer that looked at Weta Digital’s production process for War for the Planet of the Apes.

What is made abundantly clear in that piece is that, although the essence of the performance may belong to Serkis, the final character and performance that appears onscreen represents the creative contributions of dozens of digital artists and animators. It is both a remarkable creative and technical achievement, for which many authors deserve credit.

While there is no way to compel Serkis to stop his self-mythologizing deception, there is one solution and that is for the artists themselves to hold Serkis accountable.

Each time Serkis has neglected to credit his creative collaborators, more and more of them have spoken out. In the past, Serkis’ sole authorship has been questioned by Randall William Cook, the animation supervisor on The Lord of the Rings trilogy, who called any suggestion that Serkis was entirely responsible for the performance of Gollum a “misrepresentation of the facts.”

The latest Wired video drew a rebuke from another unlikely source: Ahmed Best, the actor who performed Jar Jar Binks in Star Wars: The Phantom Menace. Best likely wouldn’t have become entangled in this debate except that in the video, Serkis not only attempted to distort the production process of his own films, but to rewrite the entire history of performance capture, erasing important people from the development of the technique.

Early on in the video, a visual timeline of the development of motion capture is displayed that jumps from motion capture in medical industry usage circa 1983 to The Lord of the Rings in 2001. Serkis’ accompanying narration suggests that nothing significant happened with the technique during that two-decade gap except for the advancement of mo-cap in videogames. That assertion, as so many other Serkis statements, is entirely false.

In a Twitter thread, Best corrected Serkis’ revisionist history, and in the process showed that it’s not that difficult to give credit to one’s creative collaborators:

I don’t know how to retweet this and not sound bitter, but I feel I have been forgotten. No disrespect to the great @andyserkis https://t.co/4F3VBPV8Aj

1) thread: Thanks for the love today especially the Star Wars fans. Jar Jar is bigger than just me or my performance. As much as we actors

2) are on the front line when it comes to the success or the failure of characters we play, what's more important is the accomplishment of

3) bringing the work to the screen. Jar Jar helped create The workflow, iteration process and litmus test for all CGI characters to this day

4) on some days the code was being written in real time as I was moving. To deny Jar Jar's place in film history is to deny the hundreds of

5) VFX technicians, animators, code writers and producers their respect. People like John Knoll, Rob Coleman @arfkeldo and scores of others

6) who I worked with for two years after principal photography was ended to bring these movies to you. There's a joke I like to use when

7) talking about this stuff, Jar Jar walked so Gollum could run. Gollum ran so the Na'vi could fly. Thanks for lifting me up today.