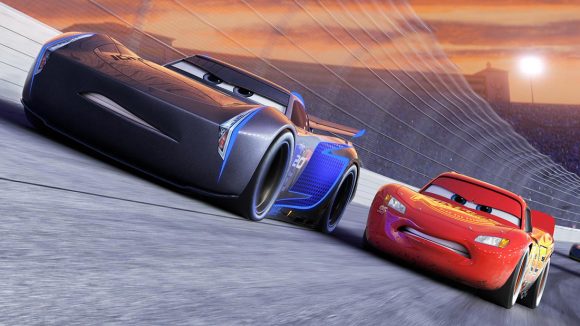 The North American International Auto Show (NAIAS) is known for being the premier event for auto industry reveals, but this year’s show featured a unique and unexpected addition: Pixar. The Disney-owned animation studio teamed up with NAIAS to host a press conference for its next theatrical release, Cars 3, directed by Brian Fee, arriving in U.S. theaters on June 16, 2017.

“We’re so excited to be here because this is where the movie Cars got its start,” John Lasseter, chief creative officer of both Pixar and Walt Disney Animation Studios, said at last weekend’s conference, in reference to the fact that he had done research for the first movie at NAIAS back in 2001. “When I finished directing Toy Story 2 at the end of 1999, I took my family on a cross-country motor home trip. My life had been driven by deadlines. Deadlines, deadlines, deadlines. And on that trip I learned a lesson: that the journey in life is the reward. It’s not about the destination, it’s the journey.”

After his trip, Lasseter knew that he wanted his next film to be about that lesson. He quickly realized that the story would be even better if told with actual cars. This led him on a new journey to research automobiles and learn everything he could.

Now back in Detroit, the hype for Cars is as high as ever. Aside from Toy Story, Cars is the only Pixar franchise to reach a third chapter (along with several shorts in between). Certainly this has had a huge impact on toy sales for Disney, but you have to wonder how Cars might influence the sales of automobiles.

“There might be some kid today who’s fourteen that wants a ’67 Mustang or Camaro because of the Cars movie and that iconic muscle car era,” John Waraniak, v-p of vehicle technology for the Specialty Equipment Market Association told Cartoon Brew. He believes that the combination of movies (particularly the Cars franchise) and modern automobile features (such as connectivity) are building consumer interest.

“The cool thing is, cars are the new frontier of technology,” Waraniak added. “You look around here [at the Detroit auto show] and it’s everywhere. People want to be involved in the car industry again because it has so many things happening in it. That [and the] the movie are going to help attract more people to cars.”

Ivan Feinseth, an analyst at Tigress Financial Partners, thinks that movies like Cars ignite the “animal spirits” within consumers that make them want to drive, regardless of age.

“Believe me, as these animal spirits continue to be ignited, people are going to be motivated to buy fancy sports cars,” said Feinseth. “And all of the big manufacturers focus on special versions of high-performance – Mercedes, BMWs, Lexus, etc.”

Not everyone is convinced that movies are enough to lure drivers or influence purchasing decisions, however.

“I think the movie and technology around Cars is cool, but I think it’s a hard sell to say that a [movie-going] experience at five is going to affect a buying choice 13 to 15 years later,” said Karl Heimer, a consultant for the automotive industry. “It’ll certainly do nothing to turn off people. It’ll get lots of kids talking. I don’t know that I could create the causal chain that says it affects a car-buying decision in a world that is literally a dozen or so technological generations later.”

On the upside, driver preferences won’t stop kids from piling into theaters on June 16, which is good news for Pixar. “Disney is on a roll,” said Feinseth, referring to the studio’s “incredible slate” for 2017. Besides the new edition of Cars, Disney’s lineup in the first half of this year includes the live-action Beauty and the Beast on March 17, Guardians of the Galaxy Vol. 2 on May 5, and Pirates of the Caribbean: Dead Men Tell No Tales on May 26.