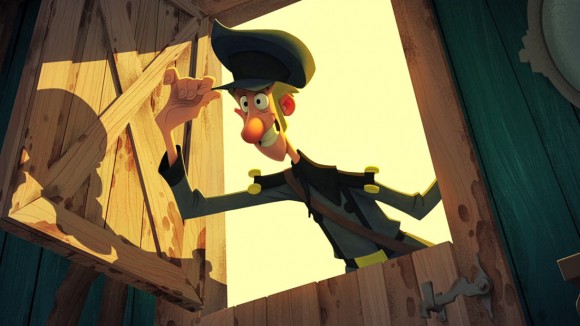 VFX/animation studio Cinesite transformed the North American feature landscape yesterday with announcement that they are building a major new studio in Montreal, Canada, a significant boon to the city’s burgeoning feature animation scene.

The studio’s debut project, the first of nine films, will be Sergio Pablos’s Klaus, which had its exclusive trailer debut on Cartoon Brew last spring.

To embark on its ambitious feature animation plans, the UK-headquartered Cinesite, which recently acquired Vancouver-based vfx shop Image Engine, has opened a 54,000-square-feet animation studio in downtown Montreal. The new facility will have the capacity for 500 permanent staff.

“Our government supports this project’s realization, which will promote the advancement in Quebec of a leading-edge expertise in the production of animated films, a rapidly growing field at the moment,” stated Philippe Couillard, the Premier of Quebec, at yesterday’s studio opening. “In doing this, my government is actively working to increase the competitiveness of Montreal. This investment acknowledges the talent, creativity and quality of Quebec’s labor force and the importance of Montreal as a world player in this industry.”

Canada’s Quebec government, through its Investissement Quebec arm, is advancing a loan of C$2.4 million (US$1.7M) to Cinesite to assist the studio in setting up its production infrastructure. The government is also advancing an additional loan guarantee of C$19.6M (US$14.1M) to Cinesite to bolster the company’s own investment of at least C$90M (US$64.9M) for the production of its first three films.

When the studio is operating at full capacity in 2020, Cinesite intends to employ 500 full-time staffers. To put that into perspective, the deal allows Cinesite to increase its animation/vfx capacity by 100%, or essentially double its global workforce.

Cinesite has been angling to supplement their vfx business, including work on films like The Revenant, Iron Man 3, and the Harry Potter series, with entry into the more lucrative feature animation market, where they have a better shot of developing and owning intellectual property. In 2014, they announced production on a feature called Charming, which is being directed by Ross Venokur, with animation direction by veteran Disney Feature animator Jason Ryan. That film, however, will not count toward the nine upcoming features, as it is part of an existing four-film deal with 3QU Media, a company co-founded by Shrek producer John H. Williams.

“Drawing on the sophisticated techniques developed over the last 20 years in the visual effects industry, we wanted to build a new creative home for the world’s best storytellers, writers, directors and animators,” said Eamonn Butler, Cinesite’s head of animation. “Whether you are an established filmmaker or an emerging writer, we want you to think of our studio as a new destination where your work can be nurtured and flourish.”

New content will be developed through Cinesite’s own content creation and intellectual property arm, Comic Animations. For the announced Klaus project, Comic Animations will work with Pablos’ SPA Studios and Atresmedia Cine to co-produce the film in Montreal.

Pablos, who is not only a revered classical animator but also came up with the original idea for Despicable Me, is attached to write and direct Klaus, and Jinko Gotoh, who has produced in various capacities on The Little Prince, The Illusionist, and Finding Nemo, will produce. The project will be a treaty co-production with Spain.

“Working with like-minded people who have a can-do attitude and respect the creative talent and process, coupled with Cinesite’s amazing new facility, the decision to come to Montreal was made very easy,” said Sergio Pablos in a statement.

Comic Animations is also working with Dublin-based River Productions to develop an animated feature that takes its inspiration from the 1990s Irish dance craze Riverdance. Few details are available, but Bill Whelan’s Riverdance music will be used in the film.