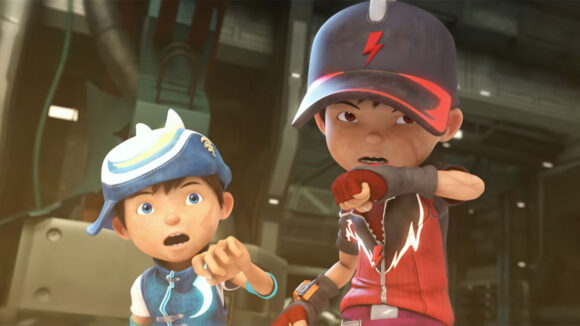 Every year for a decade, movers and shakers from the Asian and global creative sectors have congregated in the Malaysian city of Cyberjaya for the Kre8tif! conference. Here, in the heart of Malaysia’s tech hub, is where local creators come to pitch animated shows to companies from all over the world, helping forge the country’s reputation as one of Southeast Asia’s animation powerhouses.

This year, forced by the pandemic, the event was held online (on September 7–10). Speakers from industry titans like Weta Digital and Cartoon Network delivered virtual talks and workshops, while creators and buyers assembled for scheduled e-pitches and networking sessions. From what Cartoon Brew saw, the platform functioned smoothly, living out the digital-first promise of Cyberjaya’s name.

Malaysia is well known for its service studios, but in recent years the industry has matured into a petri dish of successful original IPs. The country is now the largest creator of local content characters in Southeast Asia, according to a recent report on the region’s animation production. Kre8tif! is both a cause and a display of this creativity — a polished, popular event that helps define a national identity in Malaysian animation, while connecting the industry to the world.

What is this identity? Different buyers in attendance this year perceive different qualities in what they saw. “It’s [in] the family and educational values, which are unique, but at the same time can be universal,” says Hitendra Merchant, CEO of Yoboho New Media, a kids’ digital content company based in India. “The excellent projects do stand out on the basis of either the narrative or the animation and technical capability.”

Richard Rowe, director of international acquisitions and co-productions at Canadian kids’ content company Wildbrain, was struck this year by another common quality in the Malaysian projects. “I feel like the biggest indicator is a visual one,” he says. “There’s some really wonderful art coming out of Malaysia. I can’t speak to specific Malaysian stories, but I will say that universality is very important.”

The tension between the local and the universal — between a distinct cultural flavor and an appeal to global buyers — is a matter to which Flordeliza Dayrit and Michael Milo, respectively COO and CEO of digital platform Muslim Kids TV, pay close attention. This year marked the second time Dayrit and Milo attended Kre8tif!.

“A trend we have seen in the children’s animation industry is towards maximum sellability,” they tell us. “By this, we mean removing the sense of a local culture so that the producer can try to sell it in as many markets as possible. Personally, we find this approach a disservice to children, since they are not exposed to the diversity of cultures and points of view. The pitches in our panel went counter to this and really celebrated local experiences.”

As examples of overtly “local” kids’ IPs, Dayrit and Milo cite Wau Animation’s Ejen Ali, a sci-fi action show set in a fictionalized Cyberjaya which “celebrates heroes from diverse backgrounds,” and Les’ Copaque Production’s Upin & Ipin, which is set in rural Malaysia. As it happens, both shows have found international distribution after building a large following at home: Ejen Ali has been picked up by Amazon Prime Video in the U.S. and elsewhere, while Upin & Ipin has aired on Disney Channel Asia.

Don Anderson, head of family and learning partnerships at Youtube APAC, gives another example: Boboiboy, a superhero show set in a markedly Malaysian suburban world (image at top of article).

The producers, Animonsta Studios, are “like a studio of the future,” Anderson explains. “They think about the whole experience around an IP. They had actually distributed across [traditional Malaysian broadcaster] Astro, and then eventually moved their content to Youtube, and built up a real strong presence there. But they’re also doing licensing and merchandising. They’re doing publishing.”

Rowe also notices a shift in local studios’ distribution strategies. “One of the main things I’ve noticed is that producers are more open to building their IP with digital broadcast in mind,” he says. “It’s no longer the case that we have to sell the idea to producers of launching their shows digitally first. Many producers are now thinking about this and how a digital-first strategy can actually help them build brands and attain carriage on linear platforms.”

Ambition and success don’t arise in a vacuum. Anderson points out that deals with platforms like Netflix give Malaysian studios not only wide distribution, but also experience in dealing with and pitching to global buyers — knowledge that then spreads through the industry. He also acknowledges the relatively generous public support the industry receives, not least through Malaysia Digital Economy Corporation, the government body that organizes Kre8tif! and generally supports the digital and creative sectors.

Anderson evokes the industry’s scrappy early days: “If you go visit [studios like] Animonsta and Digital Durian in Cyberjaya, you can see the roots of where they began, which was three or four of them in a small room, hatching these ideas that now travel globally.” The political support has turbocharged its growth, but this wouldn’t have happened without the “grit, determination, and creativity” of the artists and studios themselves.

“Malaysia is like a hidden gem — not talked up a lot globally,” Anderson concludes. “It’s a quiet giant of animation.”

Cartoon Brew will be covering Malaysia’s animation industry in depth over the coming months, examining its place as a leader in Southeast Asian animation and exploring the challenges it faces in the pandemic. Stay tuned.