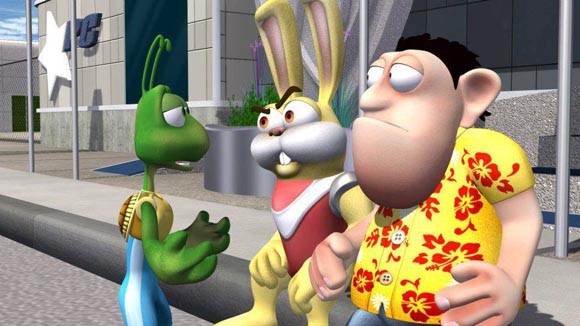 The Last Flight of the Champion hasn’t been on my radar at all, but it would appear to be an independent Amercian CGI theatrical feature. The film will debut this Saturday in fifteen theaters around the United States. Champion was directed by E. Thomas Ewing and produced by Houston, Texas-based Omnipulse Entertainment. The synopsis:

Neddie Nerfhoffer has a dream. With his society embroiled in an intergalactic war with a ruthless dictator Neddie just wants to do his part. After finding an ancient warship long forgotten, Neddie forms a crew of his childhood friends and takes to the stars intent on bringing the Warlord General Disdain to justice.

I’m impressed that the makers of the film believed strongly enough in their concept to not only produce an entire feature, but to also create a slick film website with online games and self-distribute the film theatrically. For more information, visit LastFlightoftheChampion.com.