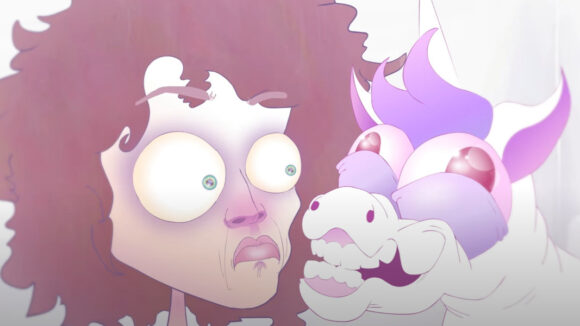 Slamdance 2023 kicked off this weekend in Park City, Utah, and Matt Kiel’s animated feature Unicorn Boy is among the films that will screen at the festival, which runs through January 29.

A coming-of-age story written, directed, animated, and produced by Kiel, the film got a pastel-drenched trailer last week, ahead of its world premiere on Sunday, January 22, at 7:30pm MT.

Unicorn Boy is the story of Matty, an artist struggling to get over a recent breakup. As if things weren’t bad enough in Matty’s life, the despondent protagonist gets sucked into an alternate dimension inhabited by unicorns and tasked with conquering a dark force to bring peace to the equine kingdom.

“For the majority of my time animating, I’ve used it as a means of digesting my emotions, experiences, and mental health issues,” Kiel explained to Cartoon Brew ahead of his film’s premiere. “I love animation an unbelievable amount, so it has always been my medium of choice, but it also truly allows one to make any story happen with a very small team. So, it is an amazing storytelling vehicle.”

Kiel animated the entire film himself with Adobe Animate, using Adobe Premiere Pro to edit and Procreate to create the backgrounds and other painted elements. He did, however, have a steadfast team behind him “including producer Neil Garguilo, who was invaluable in making the movie happen, and Dimitri Smith, who created an amazing original score that complements the visuals perfectly,” he pointed out.

Kiel spent a little more than four years in production on Unicorn Boy, and another two in development or working on projects that led up to the story he tells in his debut feature.