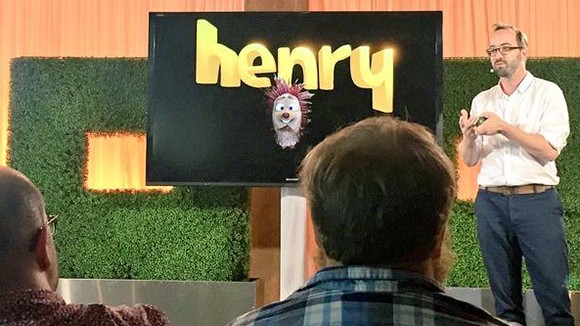 As a proven layout artist and director of animated shorts, including Pixar’s The Blue Umbrella, Saschka Unseld knows a thing or two about cinema. But since becoming the creative director of Oculus Story Studio, Unseld feels as if he’s gone back to film school.

Of course, he’s not alone at Oculus, which drew back the curtains on its VR cartoon short Henry this week. From the company’s overall presentation to Cartoon Brew’s individual interviews with technical director Max Planck and Unseld himself, everyone at the relatively new Oculus Story Studio seems clear on the point that, for all of its charm and skill, Henry is still just scratching the surface of what VR cinema can do.

Unseld calls the interactive nature of VR film “The Letting Go,” a suitable mantra for directors who are used to (literally) calling the shots but now must hand over the cinematic experience to individual viewers, each with their own tendencies and desires. Unseld says he’s still not exactly ready to let go entirely, although he knows he probably should, so that Oculus and VR cinema can evolve beyond what Max Planck calls the “novelty phase.” I caught up with Unseld yesterday in a quiet corner of the Beverly Hills mansion that Oculus rented for the occasion of Henry’s launch.

Cartoon Brew: Henry, directed by Ramiro Lopez Dau, is a cutting-edge experience, and yet Oculus’ presentation felt informed by the sense that we are still at the formative stage of VR film.

Saschka Unseld: For me, it’s really important to always mention that. Even though we see the potential, we still have so much holding us back because the hardware is simply not fast enough. We can’t do things we really want to try, and because this is only our second film we are finding that the more we do them, the more we feel like we’re in film school again. I would have totally known how to tell and edit and pace this story if it was a normal film, but not only am I in film school again but I don’t even have the benefit of seeing a million [VR] films.

There is always this mixture of loving the process of making VR film, while realizing how little we actually know and can do about it. I feel that there is this outside perception where people are looking for the killer film or app or product that will blow everyone else away, but it’s baby steps. You don’t open up a business and promise right away to be the next Instagram; that takes thousands of companies trying something, with one actually coming out with Instagram in the end. What you do is many small things, and then see what happens.

Cartoon Brew: One thing I noticed right away about Henry is that the story and character pulled me in, but once I was there I wanted to explore the environment. How do you keep viewers focused, while freeing them to exploit VR’s immersion?

Saschka Unseld: I mean, we always want both. Something that we learned from Lost [the first Oculus Studio Short directed by Unseld] is that we should give viewers some space in the beginning, to get settled and look around a bit. But it’s hard, because if you show it to different people, different people react in different ways. We’ve had viewers who just sit and look straight ahead, who don’t move at all or look around, and there are others who just want to crawl in and explore everything. But for me, it’s most important that we have movement and not just rotation, because then it’s just 360-degree cinema, which kind of exists. I get immense joy out of the movement, even though some don’t even bother with it.

For example, there’s a ladybug that comes crawling in at the beginning of Henry. Initially, we placed different objects on the set that rewarded viewers for looking around, so if you glanced at, say, the rocking chair, maybe the ladybug would come crawling from there. But we soon found out that we had viewers who didn’t look around at all, so we decided that we were moving too fast and had to pull back and use the ladybug as something that directs your attention to Henry, in case some people don’t get it. So you don’t have to tell them, “Oh, by the way, look around!”

Cartoon Brew: VR decentralizes film somewhat, giving viewers the ability to create their own film within the specific film that’s been made for them.

Saschka Unseld: Initially, the big shift for me while talking VR with professionals was answering the question, “Where are you?” It is a black and white question. And if you’re there, it needs to make sense in the story that you are there. But at one point, and Henry is half the result of this, we found that was not true. You are the audience, that is your role, and that is fine. Your role is not being active in the story.

I think an audience can have an interaction with the film, but where does it end? Would the character be aware or unaware of that? I don’t want to completely give up control of timing, emotion, and character. Henry sharing an emotion with the audience doesn’t break the cohesion of how he feels. You could stick your head in close and he could react, “Hey, what are you suddenly doing there?” But that would break it.

Cartoon Brew: More personally, how does it feel to be a part of these baby steps in this new frontier of VR cinema?

Saschka Unseld: I’ve always felt like I was a part of it. Even before I started film school, I was playing with computer graphics, which was around when Toy Story came out. Doing that, especially at home, was really the frontier of the time. This really feels close to that. VR made me massively appreciate normal film again. It’s once you move away from something that you start to realize all of the things you lose.