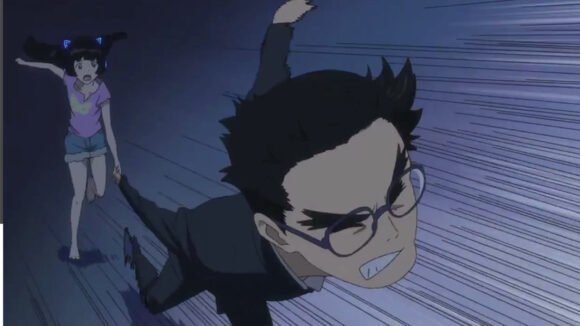 They confirmed that two new seasons of the series, each comprised of six episodes, will begin airing in 2018 on its Toonami block.

Kazuya Tsurumaki, the director of the original six-episode OVA series released in 2000, is involved as a supervisor on the new episodes. Also returning, FLCL’s original character designer Yoshiyuki Sadamoto, and the band The Pillows, which will write original songs for the new episodes. Animation producer Production I.G was one of two companies that made the first series, along with Gainax.

Speaking of these artists, how amazing is it to see a trailer that highlights their actual names? It happens all the time in Japanese productions, but not once in the entire history of American animation do I recall a character designer or animation supervisor having their name splashed across a trailer. Why don’t American producers extend this same respect to behind-the-scenes talent and celebrate the people who make these projects so amazing? Such questions need to be asked even if we already know the answer.

On broadcast, Adult Swim will air dubbed episodes of the new FLCL, but will offer subbed versions on its streaming platforms. Toho will distribute the series in Japan.

The new episodes were originally announced last year. FLCL told the story of twelve-year-old Naota Nandaba, whose life is turned upside down after he gets run over by a strange Vespa riding girl, Haruko Haruhara. The new episodes take place many years after the end of the original series, according to earlier details released by Adult Swim:

Meanwhile, the war between the two entities known as Medical Mechanica and Fraternity rages across the galaxy. Enter Hidomi, a young teenaged girl who believes there is nothing amazing to expect from her average life, until one day when a new teacher named Haruko arrives at her school. Soon enough, Medical Mechanica is attacking her town and Hidomi discovers a secret within her that could save everyone, a secret that only Haruko can unlock.

But why did Haruko return to Earth?

What happened to her Rickenbacker 4001 she left with Naota?

And where did the human-type robot ‘Canti’ go?