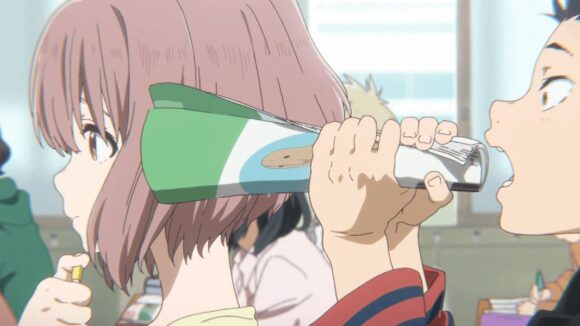 The year of 2016 was one of the richest years in the history of Japanese animation.

Makoto Shinkai’s Your Name became the highest-grossing Japanese film ever at the global box office. Another major film was Sunao Katabuchi’s In This Corner of the World. Started as a pilot film produced with a crowdfunding campaign, Katabuchi’s feature produced enthusiastic fans who have continued talking about the film on social media 10 months after its release. These two films became national phenomenons that not only connected with anime fans, but the Japanese general public.

A third animated feature belongs among the riches of last year’s Japanese cinema: A Silent Voice (Koe no Katachi), directed by Naoko Yamada, one of the few female anime directors in Japan, and produced by Kyoto Animation, a studio that has a reputation for teen and youth stories.

This film opens up a new field of anime. It’s a challenging film – some might say it’s experimental (especially the conceptual soundtrack by electronic musician Kensuke Ushio that strengthens tender feelings of the characters) – yet it also remains entertaining and accessible. In fact, it managed to become the tenth-highest grossing homegrown film at the Japanese box office in 2016.

A Silent Voice is based on a popular manga series of the same name written by Yoshitoki Oima that recounts a delicate relationship between a couple of high school teens: Shoko, a deaf-mute girl, and Shoya, who bullied her once at an elementary school.

Because of the subject of the disability, the film sparked its share of controversy at the time of its theatrical release in Japan. But the way the film dealt with this theme is brave and sincere. As you will notice from the words of the director in Cartoon Brew’s interview, A Silent Voice is a moving piece about forgiveness for the mistakes made in the past, purity of feeling, and death and resurrection.

Yamada is now busy making her fourth feature called Liz und ein Blauer Vogel (Liz and the Blue Bird), which was just announced a few weeks ago and will be released next April in Japan.

Cartoon Brew spoke with Yamada via email about the film, which currently playing in U.S. theaters through distributor Eleven Arts Anime Studio.

Cartoon Brew: In various interviews before the theatrical release in Japan, you said you couldn’t look back on A Silent Voice because you devoted yourself to the production too much. Now that a year has passed and the film has become a big hit in Japan, what kind of feelings do you have about the film?

Naoko Yamada: Because I was totally into the film during the production, I still miss the memory of that time…I remember what I felt at the moment the movie was released and reached the audiences: I thought my role had finished, and from now I just needed to leave it to the audience’s emotions and thoughts. Among the works I’ve been involved with, I felt this feeling most powerfully for this film. During the production, I just hoped many people would experience truly cinematic feelings from the film so I was very happy that it had such a big reaction.

It is surprising that the film never treats hearing impairment of Shoko as a special thing. Rather, it’s treated in the same matter-of-fact manner as the suffering of Shoya and other characters. All of the characters suffer equally no matter what kind of problems they have. It’s like saying Shoko is lonely not because she is deaf, but because she is a human. This approach is risky, and there was a big debate about the topic after the release in Japan. However, it seems that the approach was a conscious choice, with the understanding of this risk. Can you discuss the reason for choosing this path to depict the disability?

Naoko Yamada: I did not want to have a biased view. In the case of this work, people discussed the hearing disorder and bullying, but these were never the main subjects of the film. If you think, “Shoko is poor because she has a hearing impairment,” you impose your own selfish assumptions onto her character. Of course, it is one of the obstacles she confronts, but I don’t think she herself wants sympathy from everyone for that. It was more important to look closely at her: how she looks at the world and how she thinks about it. Not sympathy, but respect. I took the same approach with all of the characters because this film is about the general nature of human beings.

The film gives the feeling of going inside the mental states of various characters and observing them both with tenderness and severity; tender because the film takes a look at each characters’ suffering carefully and closely, and severe because the film reveals everything about why they suffer, and how they need to own up to their past sins. When watching the film, the audience is also forced to reflect on their own previous “crimes,” large and small, a risky decision for entertainment. What was in your mind when depicting this full range of characters’ emotions, including the unpleasant aspects?

Naoko Yamada: Because I am neither a judge nor God, I tried not to judge what they did, what they saw, what they felt, and all the circumstances surrounding them. I just tried to understand and respect their emotions and actions, which consisted of many layers and reasons. I took this approach again and again for various characters, and wove it into the world of this film. We all have experiences like them when sinking into the darkness of loneliness, and times that we think we see the light but miss it.

I also wanted to tell a story about the unconditional love of mothers, who stand by them under all circumstances. I also talk about the world surrounding them as a realm where you can reach only after going back and forth between darkness and light. The world as a profound and gentle place that accepts everything. This is what I really wanted to express in this film.

The music and sound design in A Silent Voice is very unique. The film opens with The Who’s “My Generation,” but you also use a very abstract soundtrack. Some might call the film “experimental” in terms of sound. For example, you don’t erase a squeaking noise from an upright piano. Of course, this is the perfect choice for the film, but I can imagine it is not easy to have such an approach to sound, thinking about the size of the budget for the film. Could you tell us how you realized this soundscape with the composer Kensuke Ushio and sound designer Yota Tsuruoka?

Naoko Yamada: Yes, this work was a very big and challenging project not only for me, but also for Kyoto Animation. However, the producers of this film let me keep the purity of the creative part of the film to the utmost. They really respected the world of this film. With [composer] Mr. Kensuke Ushio and [sound designer] Mr. Yota Tsuruoka, the three of us discussed the core of the film and of the creation in general. Then Tsuruoka-san proposed that Ushio-san and I should do a “session,” rather than talking on paper. We made the storyboard and music at the same time, in response [to each other]. It was like each of us making many parts of the film together. We’d meet to show each other what we were doing and integrated everything together in the end. Usually, Tsuruoka-san does this part of the integration, but he let us do this thoroughly from the beginning to the end. The sound design was done in an irregular way.

This work focuses on how the characters connect with the world outside of them. When expressing the inner world of a deaf girl Shoko and how she relates to the world, the sound played a really important role to give the work feeling. What kind of things did you think about or research to convey the soundscape for hearing impaired people? For Saori Hayami, the voice actress for Shoko, I can imagine it was a difficult task.

Naoko Yamada: I thought about how Shoko understands “sound,” then tried to express the phenomenon of what we call “sound” without sounds that are heard, like by bodily sensation received through vibration or visual things perceived by eyesight. I especially wanted to cherish her inner sounds that exist in her body, such as heartbeat, blood flow, the movement of muscle cells. These are the sounds every living thing has. Regarding the phenomenon of sound, there were some things I realized after speaking to those who actually had a hearing impairment. I also incorporated my actual experiences. Even though the protagonist of the film is Shoya, I cherished the sound that was understood and experienced by Shoko more, and also, the sound both of them have in common. [Voice actress] Saori Hayami understood this deeply and discovered the authentic “sounds” for the character.

You have directed three feature films so far: K-On!, Tamako Love Story, and A Silent Voice, and in every film, the characters feel “alive” as a real human being for the audience. Your work also shows love towards humans and a trust towards the world when depicting your characters. What is the secret to this approach?

Naoko Yamada: To accept everything as it is, I think. It’s very very difficult to achieve in real life, but I always hope strongly that I can do it.

All of these three features are set in high school era. More precisely, it is about “the end” of that era. Because you do not choose the subject by yourself, this question may be inappropriate, but I cannot help asking: For you personally, do you find special things about this era of high school?

Naoko Yamada: I never thought about it consciously, but maybe you are right. I never insisted on having this topic in my films, but I always feel attracted to this era. Maybe because it is a border between a child and an adult, the ending of puberty. I feel beauty in the mesmerized feeling that teenagers have when the growth of their mind and body confuses and scares them.

It seems that one of the main themes in A Silent Voice is temporary death and resurrection. Some people might feel religious undertones from the film. Few anime films have this type of the feelings. Do you have any influences or references for this topic?

Naoko Yamada: When I was reading the original comic, I felt like I was looking at icon paintings. Actually, icon paintings led me to study paintings, so I think this influenced the film.

Your Name, In This Corner of the World, and A Silent Voice…these amazing anime films in 2016 all focused on the details and the delicateness of the world – and every film became a huge hit. From this fact, I felt that a new era of Japanese animation started last year. When watching A Silent Voice, I myself realized animation can convey the complexity and fragility of the world and us. Regarding this point, what is the most attractive thing about using animation for you?

Naoko Yamada: Since the information inside is being controlled, I think that ideas might be easier to convey in animation. Even if something is ambiguous or difficult to grasp, animation has a concrete way of conveying the idea. Of course, it depends on how you make it and what you make, but I feel charm in animation because there are almost no coincidences in this medium.