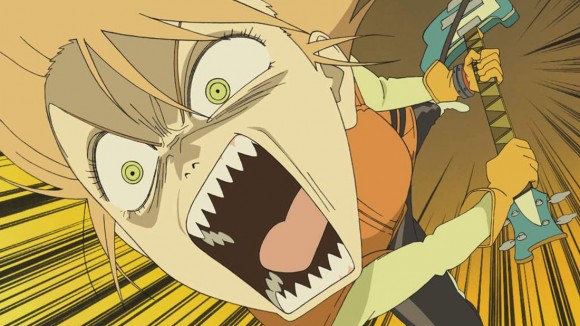 Adult Swim has announced that it will produce a sequel to the rule-breaking, graphically innovative six-episode anime series FLCL. The new episodes will be produced by Japanese studio Production I.G., which acquired the rights to the series from Gainax last fall; the two studios had both been involved in the production of the original series.

“The original FLCL is an anime classic and has been a fixture on Adult Swim since we first laid eyes on it,” said Jason DeMarco, senior vice president/creative director, Adult Swim On-Air. “I’m beyond thrilled to be able to produce a sequel with the original creators, for Toonami, where it belongs.”

The original FLCL told the story of twelve-year-old Naota Nandaba, whose life is turned upside down after he gets run over by a strange Vespa riding girl, Haruko Haruhara. The new series picks up many years after the end of the original series, according to Adult Swim’s press release:

Meanwhile, the war between the two entities known as Medical Mechanica and Fraternity rages across the galaxy. Enter Hidomi, a young teenaged girl who believes there is nothing amazing to expect from her average life, until one day when a new teacher named Haruko arrives at her school. Soon enough, Medical Mechanica is attacking her town and Hidomi discovers a secret within her that could save everyone, a secret that only Haruko can unlock.

But why did Haruko return to Earth?

What happened to her Rickenbacker 4001 she left with Naota?

And where did the human-type robot ‘Canti’ go?

Launched in 1987, Production I.G is best known for its partnership with Mamoru Oshii on his Ghost in the Shell series, as well as the TV series Psycho-pass and Attack on Titan. The studio also created the animation sequence for Quentin Tarantino’s Kill Bill: Vol. 1.

The new FLCL series is scheduled to premiere in late 2017/early 2018 on Adult Swim’s Toonami block.