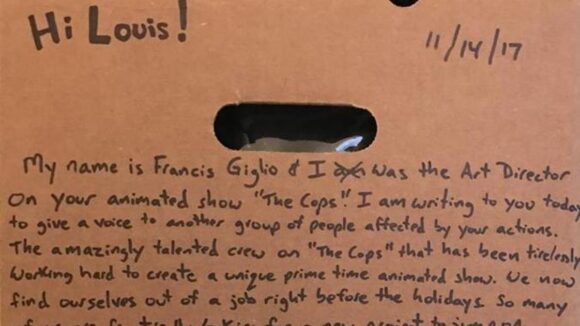 Among the people impacted by last week’s revelation that Louis C.K. had sexually harassed numerous women: the crew of his upcoming primetime animated series The Cops.

Following Louis C.K.’s confirmation that the allegations were accurate, TBS halted production on the series, which was being made at Starburns Industries in Burbank, California. There is uncertainty about whether TBS will find a way to move forward the show, which starred Louis C.K. and was co-created by him.

The artists who were working on the series, however, have been laid off from the production. They were given the news on Monday.

One of those artists, art director Francis Giglio, wrote an open letter to Louis C.K. and posted it on his Facebook page yesterday.

With Giglio’s permission, we are reprinting the letter below. Giglio tells Cartoon Brew that the show had been redesigned from the earlier images released from the pilot, and that he was “very happy with how the show was coming together thanks to the amazing crew we had.”

Giglio’s letter was written on a box that he used to pack up his office:

My name is Francis Giglio and I am was the Art Director on your animated show “The Cops.”

I am writing to you today to give a voice to another group of people that have been affected by your actions. The amazingly talented crew on The Cops that has been tirelessly working hard to create a unique prime time animated show. We now find ourselves out of a job right before the holiday season. So many of us are frantically looking for a new project to jump on. Myself included as my wife stays home with our 3 year old daughter and I want to always make sure they are taken care of.

However here is the bigger point.

All of the stress and frustration that I find myself in now is nothing compared to the pain and distress you have caused those women. I will happily walk away from this project and any other project to fully support anyone that needs to come forward about sexual abuse or harassment.