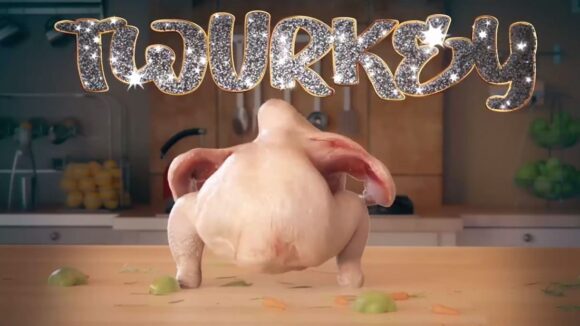 If you’ve been on social media anytime in the last 12 months, there’s a good chance you’ve run across this twerkin’ turkey animation.

The animation may not be the first to depict a turkey that twerks – the joke has been made since twerking entered the pop culture lexicon – but it’s certainly the most lovingly crafted, beautifully lit and textured, and convincingly natural twerking turkey out there (achieved in part with heavily-edited mocap data and jiggle deformers). It’s so well done too that you almost overlook the fact that the turkey with the moves is actually a plucked and beheaded carcass.

The breakout success of the the animation has been a mixed blessing for its creator, Joel Erkkinen. For any independent animator, having one’s work seen hundreds of millions of times, and possibly billions at this point, is a cause for celebration. But though the animation went viral beyond his wildest expectations, Erkkinen has received little recognition as the creator of the work and almost no money, save for a couple hundred dollars’ worth of Youtube revenue. On top of all that, a stolen copy of Erkkinen’s animation played a role in popularizing “Mi Gente,” one of this summer’s biggest music hits. More on that in a second.

Erkkinen, who works as an animator and art director in St. Paul, Minnesota, started out the twurkey animation as a fun project on the side. “I had a very specific image in my head for a long time,” he tells Cartoon Brew. “I want to make people laugh. A lot of my art has always danced on that line of being funny and also a bit creepy or unsettling. I personally don’t think the Twurkey is creepy or disturbing, but I like the idea of people being unsure or uncomfortable laughing at imagery. At the same time I want to be able to show my art to my kids, and when they laugh I know I’ve done something right.”

He posted the Maya-animated clip on his Facebook page on November 23rd, 2016, and later added a GIF of the animation on Imgur. That was all it took for the video to take off and within weeks it had accumulated over 100 million views, mostly through Facebook pages who had taken the video without Erkkinen’s permission.

Erkkinen did his best to keep up. For the bigger Facebook pages, he sent out requests asking that he be credited. But soon he was overwhelmed by the sheer volume of theft; Facebook, Instagram, and Youtube were flooded with uploads of his animation. Trying to control it would have become a full-time job.

He acknowledges that while some of the music in the intro and outro is royalty-free, he did use an edited portion of “Work It” by Missy Elliot, for which he did not have the rights. “The irony is not lost on me,” he says, “but I genuinely believe that the animation stands alone and that it is not the song that really drives the popularity.”

He would soon have plenty of proof to back up that claim.

One of the many people who took a copy of Erkkinen’s work was French DJ/musician Willy William. He stripped the animation of the Missy Elliott music, added the hook from his latest track “Voodoo Song,” and posted an edited version of the animation on his Facebook page on December 2, 2016. That video became one of the biggest versions of Erkkinen’s animation, racking up over 40 million views within 48 hours and giving the widest exposure up to that time for William’s “Voodoo Song.”

After Erkkinen requested William credit his work and didn’t get a response, he reported a copyright infringement to Facebook, and the site removed the video.

This prompted the French musician to email Erkkinen on December 5, 2016. In it, he apologized to Erkkinen and asked for permission to continue using the video, writing:

“So sorry for making a mix using my music production using your video. I’ve just done for fun and then I was wonder by what’s happening on it, like buzz so fast…But think about the big buzz you can enjoy too if you ask Facebook to let this version on my Facebook fan page. I need you to tell Facebook that it’s ok for this time, and let’s work together by putting your name on it and make it clean.”

Even though Erkkinen had the William version of Twurkey taken down, countless other copies of the unauthorized William clip were being re-uploaded to different social media platforms (and copies still exist, like the one below). One version on Instagram got 600,000 views in less than a day. It was a bona fide hit.

In the following weeks, Paris-based Scorpio Music signed William to its label. The importance of Erkkinen’s turkey animation became clear when the label chief Anthony Belolo contacted Erkkinen. (The Scorpio label, run jointly with Universal Music Latin/Republic, was founded in the 1970s by Belolo’s father, Henri, the influential disco-era producer who popularized the Village People.)

Belolo wrote Erkkinen on December 23, 2016: “The reason I contact you today is that I just signed on my label the artist Willy William for the world. Willy explained to me that he had used your video production of the twerking chicken without your authorization nor any agreement … First I’d like to say I’m very sorry for that. This is not my way of doing business. He is an artist and did not realize he was infringing some copyrights. He only thought about making a buzz.”

Added Belolo: “However as you might have observed, thanks to the combination of your funny video and the Audio production of my Artist, the video went viral on Facebook and broke all records ever established! Millions of views and shares in less than 48h. This is the reason I believe we should allow it again on Facebook to help us promote your video production/your company and our song. This is a very powerful video that can boost the communication of our companies.”

Belolo offered to make Erkkinen a deal in which the label would have permission to use the animation for free. Erkkinen countered with a proposal that involved monetary compensation for his animation. He never heard back from the label.

“It’s funny to me that a record label owner would just say, ‘Sorry, we can both benefit,’ whereas if roles were reversed, no one could use his music without a cost,” Erkkinen points out.

There is a coda to the story. Scorpio Music combined Williams’ “Voodoo Song” with vocals by Colombian singer J. Balvin to create the Latin dance track “Mi Gente,” one of the big summer anthems of 2017 which continues to rise in popularity, even overtaking Luis Fonsi and Daddy Yankee’s “Despacito” on some Latin charts last month.

The music video for “Mi Gente” has over 1.3 billion views on Youtube and the song has been hovering around the top of Billboard’s Latin Airplay chart for months now. Its Beyonce remix peaked at no. 3 on the Billboard Hot 100 in the United States.

Erkkinen’s own copy of the film on his Facebook page has 55 million views now. It went viral again this Thanksgiving holiday, and he continues to allow viral video pages on Facebook to use it as long as they credit him and don’t monetize the film.

Leading viral video outlets like Unilad, VT, and LAD Bible have taken advantage of that opportunity, generating tens of millions of additional views. It should be noted that all of these sites have replaced the Missy Elliott music with different royalty-free music and they’ve all scored hits; any music seems to work as long as the turkey’s jiggling.

What guidance does Erkkinen give to other animators who experience a hit with their work? He offers these tips: “If I were to give any advice to people it would be to have the various sites [using the work] write a call to action when crediting work. Something like ‘Go Visit (link) for more!’ Right now most Facebook sites that post the Twurkey just say, ‘Credit: (Link to Joel Erkkinen Art FB page),’ which really does not drive much traffic to my site as most people watch and move on.”

Format is also important, Erkkinen recognizes: “When posting your work make sure you have a square version ready as well. All of the viral posts with my Twurkey were square. That way they can be viewed easier on a mobile device. If I were to do it again I would have first posted a square one-minute version with black bars and my words in the bars.”

Erkkinen hasn’t let the “fowl” behavior of others get him down, and remains busy today creating all kinds of art projects. He’s illustrating a book called ABCDeath with author Shane Hawley, a National Poetry Slam champion. He’s also working on a short film, as well as another short turkey animation, and he recently started a series of short animation clips starring America’s turkey-in-chief. Next year, he plans to start selling artwork and books on his website JoelErkkinen.com.

(Note: The emails excerpted in this piece were edited for spelling/clarity.)