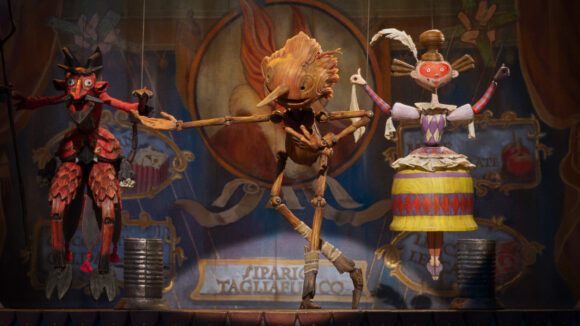 For the second year in a row, Netflix has won the best animated feature Critics Choice Award, this time with Guillermo del Toro’s Pinocchio. This was also the third year in a row that a direct-to-streaming film has won the award.

Last year, Disney’s Encanto was the animated darling of much of the awards circuit, but it wasn’t the first choice of the Critics Choice Awards, which opted for Sony Pictures Animation’s The Mitchells vs. The Machines, which was acquired for distribution by Netflix. In 2020, another streaming film – Disney-Pixar’s Soul – won the Critics Choice after skipping theaters due to the pandemic.

Guillermo del Toro wins Best Animated Feature at the @CriticsChoice Awards and reminds everyone that animation is not a genre for kids, which is ironic since the Critics Choice chose a child to present this year's animation award. pic.twitter.com/cKewAHSI1K

The Critics Choice Awards have traditionally favored Disney in their animated feature category, which is perhaps not a surprise, but they’ve also been more open to other studio features when picking their favorite animated films. Besides Mitchells, Sony’s Spider-Man: Into the Spider-Verse won in 2019 and Warner Bros.’s The Lego Movie won in 2015. Conversely, the Oscars have only awarded non-Disney films only twice in the past 15 years.

Pinocchio was up for the Critics Choice against four other animated films: Marcel the Shell with Shoes On, Puss in Boots: The Last Wish, Turning Red, and Wendell & Wild.

This latest win for Pinocchio, following last Tuesday’s Golden Globes win, makes it the clear frontrunner to take the Oscar on March 12, but the Academy would have to overcome its long-standing bias favoring films produced by The Walt Disney Company.

Guillermo del Toro’s Pinocchio was directed by del Toro and Mark Gustafson from a screenplay by del Toro and Patrick McHale, based on the eponymous story by Carlo Collodi. It’s a Netflix presentation of a Double Dare You! and Shadowmachine production in association with the Jim Henson Company.

Other animation winners at the Critics Choice were HBO Max’s Harley Quinn for animated series and Avatar: The Way of Water for visual effects.

The other nominees for animated series were Blue, Bob’s Burgers, Primal, Star Trek: Lower Decks, and Undone. The visual effects nominees were The Batman, Black Panther: Wakanda Forever, Everything Everywhere All at Once, RRR, and Top Gun: Maverick.