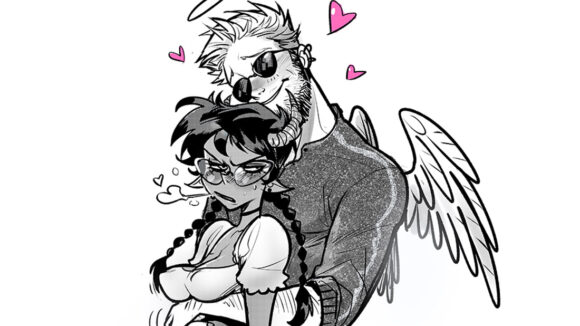 Who’s involved: Andolfo is partnering with the Turin, Italy-based Arancia Studio and CEO Davide G.G. Caci to develop the project, which has been optioned by Alessandro Regaldo at Grey Ladder Productions. She describes Sweet Paprika as an urban fairy tale for adults, mixing the coming-of-age themes of The Devil Wears Prada with the feminist romance of Bridget Jones’s Diary and Sex and the City. Tommaso Triolo, of the Italian comedy troupe The Jackal, will write the script for the project based on Andolfo’s story.

Another key player in the production will be Gabriele Pennacchioli, serving as executive producer. Pennacchioli received a Primetime Emmy Award for his role as supervising director on Netflix’s Love Death & Robots. Prior to that, he worked at Dreamworks Animation in both story and animation on films like The Croods, Shrek the Third, Kung Fu Panda, and How To Train Your Dragon.

What they’re saying: Andolfo says, “The production team has helped ignite what was once a dream into a vibrant and massive project. I’m still devoted to creating monthly comics, but the idea of starting a new adventure in another medium is exciting, and working alongside professionals like Gabriele and Tommaso is more than I could ever hope for!”

Adds Pennacchioli, “When I was contacted with the proposal to work on Sweet Paprika, it was love at first sight. It’s a lively and inspiring project, with a dynamism suited to the magic of animation. Mirka’s imagination offers a wide and multifaceted world, with a breath of global creativity and Italian romanticism.”

Releasing soon? It sounds like it could be a while before the animation is finished. The project is just announcing development and its creators have not yet announced a format, meaning that it could be either a series or a feature. Its format probably depends on who’s willing to put up the money to produce the animation. To do Andolfo’s artwork justice, the production will require a respectable budget, but adult animation that emphasizes craftsmanship remains a tough sell on either side of the Atlantic. It’ll be interesting to watch how — and when — this project reaches completion.