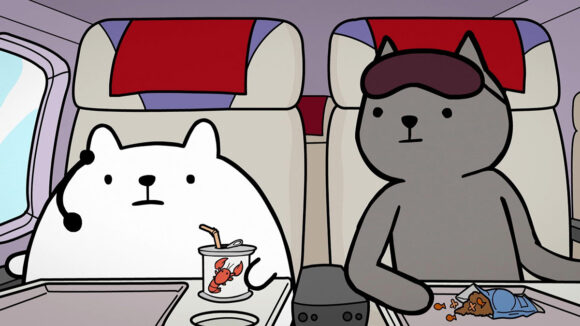 Long before the 2015 merger joining animation companies Six Point Harness (6PH) and Mondo Media, 6PH co-founder and CEO Brendan Burch had admired what Mondo was trying to do in the world of animation, especially in terms of unorthodox distribution.

The Los Angeles-based studio Six Point Harness, which just celebrated its 15-year anniversary, is known for its work on The Drawn Together Movie: The Movie! and Adult Swim’s Apollo Gauntlet. Its relationship with distribution and production company Mondo Media began in 2010, when Ed Skudder first pitched Dick Figures as part of a development program at 6PH. Burch was certain he had a hit on his hands, but knew he couldn’t take it the traditional network route. Instead, he took it to Aaron Simpson, then vice president of animation development at Mondo.

Simpson loved the idea. Eccentric comedy Dick Figures was perfectly in line with Mondo’s output, which already included Happy Tree Friends, the hyper-violent cartoon that first premiered online in 1999 and has grown to be one of the most popular animated web series of all time. Unfortunately, Simpson said Mondo couldn’t pay for an original series – but that didn’t deter Burch, who was committed to producing Dick Figures. He greenlit 10 episodes, to be distributed on Mondo’s Youtube channel, but funded by 6PH, which meant the animation studio would be able to retain full ownership of the property.

As Dick Figures took off, 6PH and Mondo grew increasingly closer. After the success of the Dick Figures: The Movie Kickstarter campaign in 2012, the companies devised a way to make the film available to all their fans and still turn a profit. They gambled – wisely – that a significant portion of their audience would be dedicated enough to shell out the money to buy the film, even if it was available to view for free.

“We came up with this plan to give [Dick Figures: The Movie] away for free on Youtube over 12 episodes, and the bet was that the viewing pattern was so disruptive that some [fans] would just be like, ‘Ah, screw it,’ and buy it. But, ultimately, all our fans would get to watch it,” says Burch. “It totally worked out. We ended up making all of our money back within three weeks. Youtube used to call it the Dick Figures model. The thing I always loved about Mondo was they were always out front, they were always figuring out these models.”

When the merger was being negotiated, it was important to both parties that neither company sacrifice its brand – after all, Mondo’s Youtube channel has accumulated over 2.5 billion lifetime views, and 6PH has made a respectable name for itself, especially in the work-for-hire arena.

A big impetus for the union was Burch’s interest in establishing a library of content for his company. Having control over the audience-facing side of the business certainly puts the studio in a unique position, differentiating it from other service studios, which often have difficulty when it comes to establishing a personal brand.

“I think owning a library is really, really important. When you just sell a tv show to a network, they own everything. Unless it’s a hit, there’s not really a lot of upside in it for us as an animation studio,” explains Burch, who is now CEO of the joined Six Point and Mondo. (John Evershed, co-founder and former CEO of Mondo, remains on the board.)

“Dick Figures was a huge light bulb moment for us, where it was like, [we can] own and develop something new. We can own it, and we can build an audience around it, and we can wield more [control].”

It’s clear, however, that Burch isn’t eager to put all of his IP eggs in one distribution basket quite yet. While Mondo’s Youtube channel is overflowing with 6PH content like Dick Figures, the studio has also continued to take on projects like animation sequences for AMC’s Dietland and Fox’s Cosmos: A Spacetime Odyssey. The studio even worked on the elusive Legend of the Three Caballeros for Disney Interactive.

Around the same time as the merger was finalized, 6PH and Mondo entered into a deal with VRV, the aggregate SVOD service owned by Crunchyroll parent Ellation, part of AT&T-TimeWarner. VRV aims to be “Netflix for geeks,” and offers premium access to multiple channels, such as Crunchyroll, Drama Fever, Rooster Teeth, and of course, Mondo Media, for a flat monthly fee. Six Point Harness-produced shows such as Gary and his Demons and Cat Agent are now available exclusively on the Mondo VRV channel.

“The VRV deal – they’ve been amazing partners,” says Burch. “They’ve evolved a lot in the two years that we’ve been connected with each other. I think they’re going to be an important partner for years to come. If they push out and expand internationally, they keep betting on the Mondos of the world, I think that’s the big opportunity – it’s international.”

One of Burch’s primary goals as Mondo and 6PH move forward as a combined entity is to exploit and expand Mondo’s already existing international fanbase. In fact, Mondo’s content has long been available in German, as a result of the enthusiastic support from German-speaking fans.

“It frustrates me, this whole notion that adult animation doesn’t travel well,” Burch says. “Animation, especially, [travels] better than anything, even in foreign language territories. Mondo has some crazy fans all around the world. Twenty percent of Dick Figures’ revenue came from Germany alone.”

Burch wants not only to expand outward in terms of international appeal, but is also interested in learning from overseas projects, especially when it comes to adult animation. Mondo recently acquired the French adult animated action-adventure series Lastman, produced by Everybody on Deck and Je ne suis pas content. The English-language version of Lastman is to be found exclusively on Mondo’s VRV channel, and Burch says the series is a good example of the niche he would like his company to explore.

“The other thing that I love about VRV is that they were big fans and supporters of a creative theory that we’ve always had, which is [that] there is a huge, huge untapped [market] for adult non-comedy animation. Western-style storytelling for adult animation is going to be a major space, and I think the French are ahead of us. When we acquired Lastman, it was like connective tissue between what the Japanese are doing really well, and what we really want to do. That’s a big creative goal of the company.”