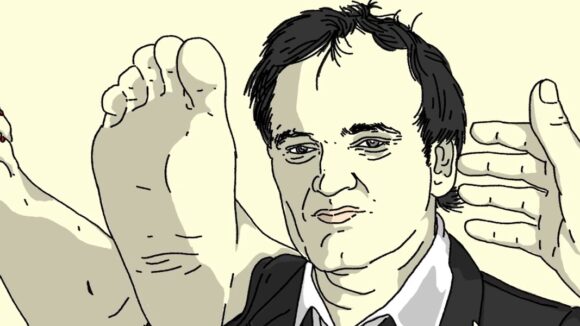 Uma Thurman boogies, Harvey Keitel whips out his gun, Hitler’s head is sliced in half. And Quentin Tarantino sits serenely through it all, impervious to the mayhem he’s created.

Welcome to Q, Roberto Biadi‘s dizzying tribute to the director. The film runs through key scenes and characters from Tarantino’s filmography in a postmodern jumble of allusions that would make the man himself proud — and with an unbridled violence that he’d relish, too. We’re premiering it exclusively below:

Turin, Italy-based Biadi animates alone, but he’s developed a close creative partnership with sound designer Enrico Ascoli, the only other person credited on Q. Below, Biadi and Ascoli tell us how they work together, what Tarantino means to them, and why the violence in his films is so sweet…

Cartoon Brew: Your previous subjects have included Hitler, Beppe Grillo, and Trump. Should Quentin Tarantino be flattered that you’ve made a film about him?

Roberto Biadi: Ah ah, that’s not entirely true: the first short was about Hokusai and his shunga masterpieces, and the ones about Grillo and Trump were really little pills. My work explores narrative, tries to give to the audience a different perspective on perception. I make moving portraits of people who are stories themselves, which is why, most of the time, they explode — it’s as if the story was a physical trait.

I don’t mind if they are good or bad people. I don’t know if Quentin has to be flattered about this, but if he sees it, I hope he has some fun.

When was the first time you saw a Tarantino film? Can you recall how it made you feel? Did you rewatch his films before starting work on Q?

Biadi: I saw Pulp Fiction, and I went to find Reservoir Dogs the day after. I was impressed by Quentin’s alphabet: the aesthetics, the music, the dialogue, the quotes from stuff I loved. It was all so useful to his huge ability to tell and develop a story, which is the point of everything for me as a viewer.

But I didn’t watch his films again while working on Q, because I was more focused on tying separate fragments together. I needed to see his cinematography as a whole, rather than as single movies.

Enrico and Roberto, you’ve worked on many films together. Can you describe your creative process and tell me why it works so well?

Biadi: I love working with Enrico because we don’t speak a lot and we don’t see each other. The first time I saw him in person was after making a couple of shorts together. He’s amazing: I finish drawing and send him the stuff with some annotations, really small things or ideas, then he does his work and it’s always a lot better than anything I could have thought of.

The fact is that, when I finish the animation, I completely hate what I’ve done till Enrico puts the magic in. His work never follows mine — we’re always walking together.

Enrico Ascoli: In Italy there are very few people who work on sound for animation movies, especially independent short movies with no budget. My debut in animation was many years ago with Donato Sansone’s first short movie Videogioco. Donato is a reference point for all young directors in our country, so through him they often ask me for help with their works.

Roberto came in this way to me and I immediately fell in love with his crazy morphing technique, because it allows me to experiment with organic sound textures and symbolic soundmarks.

Roberto, you have a striking style: your forms are constantly morphing and there are no hard cuts. How did you develop the visuals for Q? Was this approach similar to the ones you took for your previous films?

Biadi: I work with several layers of animation, always coming back and adding stuff. Sometimes animation comes out almost naturally from empty space, or following a morphing that’s already started; sometimes I need it at that point, narratively speaking. I have an idea of general development and fill it with everything that seems legit.

On Q, I had incredible scenes and ideas right from his work, so I decided not to follow the chronology of his movies, but just to go with my personal feelings about his cinematography.

The beginning is unique but still realistic (in a pulp way). Single scenes don’t morph a lot, maintaining a certain individuality. With Kill Bill he started to be more and more free. The morphing intensifies here, everything is much more melted together. He starts to change reality through cinematography. Everything points to Beatrix [from Kill Bill], who kills Hitler.

With Once Upon a Time in Hollywood, Quentin watches himself changing reality through cinematography. I just rotoscoped a scene from the movie, nothing to add. Then I added a lot of small stuff that came to my mind while drawing, like his love for feet. Or the fact that I wanted Q to be 1:08 long, because he likes the number “8” and I couldn’t make it 8 minutes or 8 seconds.

Enrico, you chose to remix Nancy Sinatra’s “Bang Bang” from among all the iconic music in Tarantino’s films. Why this song?

Ascoli: When I was a child, in my family house there was a record player and a dozen records that I used to listen obsessively. One of those was the Italian version of “Bang Bang” sung by Dalida. It was a very dark and sad song, and every time I listened I lost myself in strange fantasies.

Then Kill Bill came out. I loved that movie terribly, but unfortunately it swept away the privileged and sentimental place that “Bang Bang” had in my memory, replacing it with a popular Hollywood icon. Now, when I think about Tarantino, that song appears in my mind and vice versa; I think that this process is sadly common.

Over the years, I have understood that I do not like at all the way in which cinema appropriates musical pieces, cannibalizing them and binding them inexorably and in a totalitarian way to their place in collective memory. My use of “Bang Bang” in Roberto’s film is more the scream of my broken memory than a remix of Nancy Sinatra’s masterpiece.

Tarantino’s films are very violent, and Q reflects that. Do you think violence in live action and in animation have different effects on the viewer?

Biadi: Tarantino’s violence is pure sweetness. It’s so pure and necessary to the development of his story that it’s like using a strong red on a painting: it hits your eyes but it doesn’t hurt. I guess there are not so many differences between depicting violence in live action and in animation: it’s more about the way you choose to do it, and its necessity to the narrative.