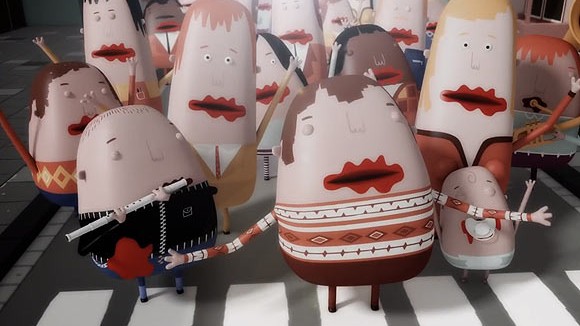 Mute is a concept that would have been grotesque in live-action but turns into something kind of sweet and charming in animation. It’s a film about a world populated by people born without mouths, and the dark way in which they discover the gift of speech.

It’s to the credit of Dutch filmakers Job, Joris & Marieke (the production moniker of Job Roggeveen, Joris Oprins, and Marieke Blaauw) that they were able to make a baby gushing blood out of its mouth look appealing and cute. That’s the power of good production design, which this film has in spades. The visuals are accompanied by a jolly soundtrack created by the appropriately named Happy Camper.

When I thought about the film afterward, the concept started to fall apart. In a long-established world of people without mouths, wouldn’t they have developed an alternative means of communication instead of struggling to speak through non-existent orifices? Why would they have vocal cords if they have no mouths? Best not to think about it. The film doesn’t exactly hold together on a conceptual level, but it made me smile throughout and that’s good enough for me.