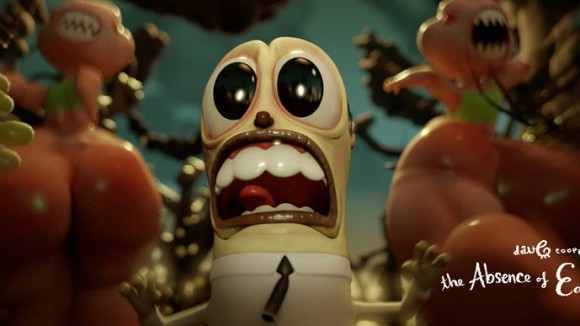 No, these are not snapshots from the latest window display at Kidrobot, they are advance images from the upcoming CG short The Absence of Eddy Table. The superbly lowbrow PVC collectible aesthetic that you see is the result of an artistic collaboration between Canadian comic artist and illustrator Dave Cooper and Norwegian animation director Rune Spaans.

The short, which follows the title character’s encounter with true love and terror after getting lost in a mysterious forest, is written and designed by Cooper, who is best known for comic works like Weasel, Beasts!, and Suckle. He also co-created the upcoming Nickelodeon series Pig Goat Banana Cricket. The director Rune Spaans is a veteran CG artist who has worked on Norwegian feature films like Trollhunter and Free Jimmy.

The Absence of Eddy Table was spurred into production by a $289,000 grant from the Norwegian Film Institute. It is being produced by Eric Vogel out of the Oslo-based production studio Tordenfilm AS. Anne Bergseng co-produces, Daniel Sappa is lead animator, and Johan Leuf is CG supervisor. The film will be finished later this year.