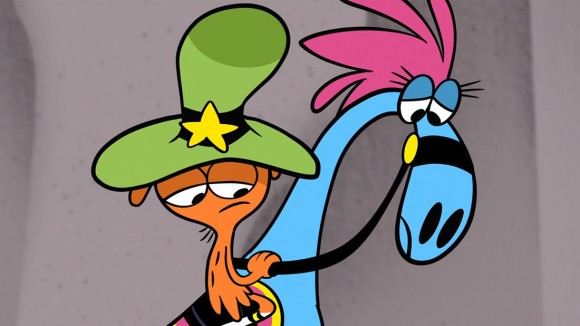 Disney XD will end Wander Over Yonder after two seasons, according to a post on Tumblr by the show’s creator, Craig McCracken.

McCracken had wished to create a third season of his intergalactic comedy-fantasy series. “About a year ago we presented a pitch for a season 3 arc that promised to bring our characters together in new, unexpected, and hilarious ways,” he wrote yesterday. “And just as S2 evolved from S1, we had a really exciting approach to evolving S3 even further. We had plans for new characters, the return of old characters, and even a bit of backstory!”

The decision, according to McCracken, was made by “the higher up bosses of bosses of bosses at Disney,” who didn’t offer any specific reasons for why they didn’t want a third season. McCracken pointed out that the decision to discontinue the show was unrelated to the season two ratings, because he had been told the show wouldn’t be renewed before the second season had even premiered.

In another recent Tumblr post, McCracken voied frustration that he had not been able to tell more complex, serialized stories in Wander, like Adventure Time or Gravity Falls. He said that Disney execs had insisted on standalone shorts “for the sake of repeats, ratings and for programming a 24 hour animation channel” which “has been the case since I started making cartoons in the early 90′s.”

A compromise was eventually reached on season two, he said, where some elements of continuity were added into the show. Still, McCracken admitted that the series “is not extremely complex and serious as some of you wish it were.”

Wander Over Yonder won the Annie Award last month for Best Animated Television Production for Children. The seven remaining new episodes will be aired through the end of June.

As for McCracken’s future plans, he wrote earlier this evening on Twitter that he is developing a new series. Under his current contract with Disney, the studio will have a first look at the idea: