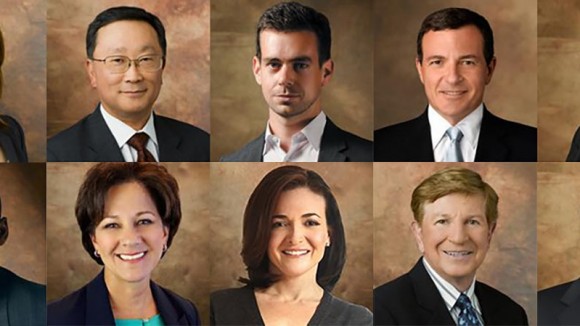 Ripple effects continue to be felt from the ongoing lawsuit against the Walt Disney Company, and several other major animation and visual effect studios, for an alleged conspiracy to suppress employee wages and drive down hiring competition in the digital animation and vfx industries.

On September 29, 2015, Disney stockholder Eugene F. Towers filed a lawsuit against key Disney executives, including Walt Disney Studios president Alan Bergman, Walt Disney Animation Studios president Ed Catmull, and Disney COO Thomas Staggs, as well as individual members of the company’s board of directors (pictured above), including chairman and CEO Robert Iger, Twitter CEO Jack Dorsey, Facebook COO Sheryl Sandberg, and former Starbucks CEO Orin Smith. The lawsuit had been under seal due to the inclusion of confidential information obtained by Towers, and portions of the complaint (which can be read here) remain redacted.

The lawsuit recounts the claims and evidence in the earlier lawsuit — from the alleged conspiracy’s beginnings in the mid-1980s, when George Lucas sold Pixar to Steve Jobs, and Lucas and Catmull agreed thereafter not to compete for the skilled labor of artists and technicians — to the broadening of the conspiracy, to include Disney, DreamWorks, ImageMovers, Blue Sky, and Sony, as well as Department of Justice investigations into the hiring practices of the studios and tech companies, including Google, Apple, Intel, and Adobe Systems.

Towers’ suit alleges that the Disney board of directors knew of the conspiracy alleged in the related lawsuit, and “actively concealed and ensured the secrecy of the conspiracy.” Because the board members filed financial statements and certifications, and “signed each of the Company’s annual reports filed with the U.S. Securities and Exchange Commission,” they are alleged to be guilty of signing “and/or certif[ying] false and misleading statements.”

Because of their positions and influence, directors have duties of loyalty and candor, and must “exercise good faith to ensure the Company” operates honestly and complies with all federal and state laws and regulations. The suit points out that Disney’s Standards of Business Conduct specifically called out antitrust laws the related lawsuit alleges were violated, stating, “Antitrust laws…prohibit agreements that unreasonably restrict competition. Don’t enter into any agreement or understanding, whether formal or informal, with a competitor to set prices.”

Given that talented and successful animation and visual effects artists generally require years of specialized training and effort — and because the community of such artists is comparatively small, and localized in California within a handful of major employers — they are particularly susceptible to such collusion among those employers, making such a conspiracy troubling.

Towers does not seek personal damages, but instead mainly seeks restitution to Disney for damages caused by the defendants’ breaches of fiduciary duty and unjust enrichment, and that the defendants surrender any “profits, benefits, and other compensation” they received as a result of their actions. Towers also seeks measures to provide greater oversight of Disney’s disclosure procedures and hiring practices, as well as greater stockholder input on the policies and guidelines of the studio’s board of directors.

This week, Disney announced an annual dividend payout to stockholders that is 19 percent higher than what the company paid out last year.