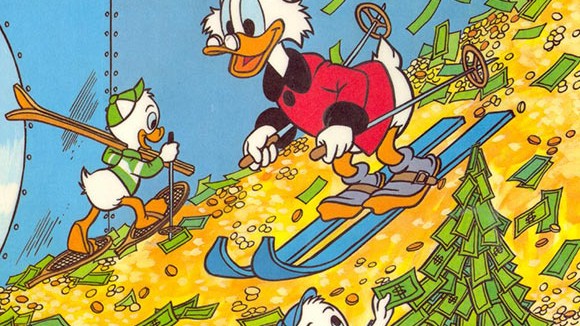 Coming off a year of record profits and fueled by all-time-high stock prices, the Walt Disney Company is more successful today than its ever been in its 92-year-history. In the past week, two major U.S. media outlets have published lengthy stories about the Disney Company’s string of good fortune: the LA Times documented the deal-making savvy of Disney CEO Bob Iger, while the Wall Street Journal took a broader look at the company’s ability to milk its properties for profit.

Disney’s dominance can be boiled down very simply to one word: franchises. Or rather, an “incessant focus on franchises” in the words of former Disney CFO Jay Rasulo.

“Everything we do is about brands and franchises,” Rasulo told a group of financial analysts last September. “Ten years ago we were more like other media companies, more broad-based, big movie slate, 20 something pictures, some franchise, some not franchise. If you look at our slate strategy now, our television strategy, almost every aspect of the company, we are oriented around brands and franchises.”

The Wall Street Journal’s deep dive into Disney’s franchising strategy offers insights into how Disney has reorganized into a franchise-driven lifestyle/consumer products organization — and upended the traditional Hollywood studio model in the process. Some highlights from the Journal:

“Everything we do is about brands and franchises.” —Jay Rasulo

* Implementing the franchise strategy was Bob Iger’s idea. Iger proposed that Disney turn around its faltering animation unit by purchasing Pixar on his second day at work, during a presentation to the Walt Disney Corporation’s board of directors. “If I didn’t turn Disney Animation around quickly…there was a drumbeat that was going to get louder and louder in terms of whether I was worthy of the job and how long I would last,” the LA Times reported Iger as confiding in his spouse, Willow Bay. “I knew that the pressure was on.” Following Disney’s purchase of Pixar in 2006, Iger acquired Marvel (2009) and Lucasfilm (2012), and their respectively massive IP libraries.

During 2006, Iger’s first full year on the job, Disney released 19 movies in the United States, with only two considered “franchises” proper: Pirates of the Caribbean: Dead Man’s Chest, and The Santa Clause 3 (a third release that year, Cars, would go on to become a franchise). Today, it releases only around ten films annually, almost wholly based on Disney, Marvel, Lucasfilm, or other divisional franchises. Iger’s methodical approach flips the movie studio model of releasing a diverse slate of projects with the hope that a few will break out, and instead assures consistent performances through a reliance on tried-and-true brands.

* Everything at Disney is driven by franchises. Disney’s consumer products group used to be separated by types of products, like clothing, toys, and home decor. Today, they are divided by franchise, like Toy Story, Mickey Mouse, Disney Princess, Marvel, and Disney Junior, the latter of which has “sub-franchises,” like Doc McStuffins and Sofia the First. Eleven of these franchises sold more than $1 billion each worth of products last year, a feat that was accomplished by just seven Disney franchises in 2011. As a result, the company generated nearly $49 billion in revenue (yes, that’s billion with a B) in fiscal 2014, which ended last September.

* Franchises extend across all areas of the company. Disney has parlayed Frozen’s status as the highest-grossing animated movie of all time ($1.27 billion) into a franchise juggernaut whose merchandising revenue now outsells its film. Iger is taking Frozen into theme parks now by rebooting Epcot’s Norwegian mythology tour Maelstrom as Frozen Ever After. The concept works: sales of Frozen merchandise so far in 2015 are 10 times higher than the same period of 2014, and its mobile game has logged more than 100 million downloads — while production on a feature sequel has barely begun.

* A committee of 20 executives researches franchises. According to the Wall Street Journal, this twenty-person committee “analyzes franchises, hunts for new opportunities and occasionally demotes fallen stars, as happened with High School Musical.” Iger makes the final decision on Disney’s annual “top franchise priorities.” Executive compensation is largely tied to performance of the company as a whole, compelling executives to look at the big picture instead of focusing only on their divisions.

* The franchise strategy limits the potential for creativity and experimentation. Under Iger’s approach, even when Disney creates an original project, like Zootopia, it must be designed with spin-offs, sequels, and other moneymaking opportunities in mind. A film is no longer just a film, but the setup for a franchise. The limitations of the franchise strategy are especially evident in the company’s theme park division, which accounts for nearly a third of all Disney revenue. Whereas the company used to build rides based on ideas that were unrelated to existing Disney properties—for example, The Haunted Mansion, Pirates of the Caribbean, and It’s A Small World—today’s theme park rides and attractions are based almost entirely on franchises. So, Hong Kong Disneyland gets the Iron Man Experience, California Adventure gets Cars Land, Magic Kingdom gets Seven Dwarfs Mine Train, and the soon-to-open Shanghai Disneyland will get an entire Pirates of the Caribbean area. Iger told the WSJ that the majority of the Shanghai attractions were chosen after analyzing which Disney franchises were most popular in China. The strategy is working, too, with 9 out of the 10 most-visited theme parks in the world owned by Disney.

How long will Iger’s influential business model last? Criticism of Disney’s fractal franchising, and arguable overload, have arisen, with doubters pointing out its stifling effect on creativity and the studio’s ability to create new properties. Another potential weak spot: the formula is easily replicable by Disney’s Hollywood competitors who are beginning to saturate the market with their own franchises. For example, beginning next year, Warner Bros. will release 2 DC Comics-based films per year, and it also has 3 Lego Movie sequels and spin-offs in the works. And with so much money being invested into so few ideas, Disney can’t afford multiple flops on the scale of its recent misfire, Tomorrowland, which could wind up losing the studio $140 million.

Few of these criticisms matter right now to Iger, whose clinical efficiency at milking franchises has made Disney the most successful media company in the world. Following a contract extension last year, Iger will remain in place as Disney’s CEO and chairman until 2018 — plenty of time to keep fueling his franchising obsession.