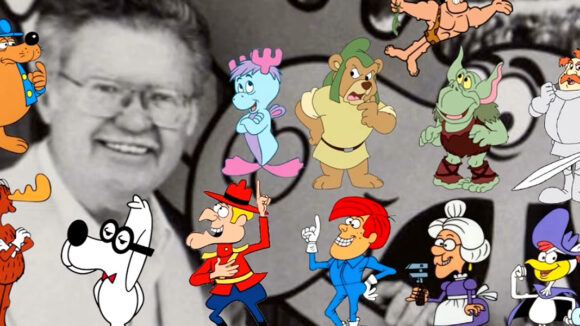 Bill Scott: The Portrait of a Moose is a fascinating two-hour documentary about the life of voice actor and animation creator Bill Scott.

It was released on Youtube a few days ago by independent filmmaker Amber Jones, and includes appearances by a who’s who of voice actors, including Carlos Alazraqui, Corey Burton, Tara Strong, Jim Cummings, Candi Milo, and Billy West. Even “Weird Al” Yankovic makes an appearance.

Scott had a long career in animation, working as a story artist and writer at studios like Warner Bros. and UPA, but he made his biggest mark in television animation during his years with Jay Ward when he produced and served as head writer of the groundbreaking comedy series starring Rocky & Bullwinkle (the show had numerous titles over the years, but is now commonly referred to as The Adventures of Rocky and Bullwinkle). Scott earned additional notoriety by voicing Bullwinkle J. Moose, as well as other Jay Ward Productions characters like Dudley Do-Right, Mr. Peabody, and the titular star of George of the Jungle.

Jones’s documentary is a true labor of love and appears to have mostly been made by one person (the only other key credit is the doc’s co-writer, Kamden Spies). It may lack the polish (or editing sensibilities) of documentaries with funding and crews, but it’s not like there’s a lot of other documentaries being made about historical figures in animation. The fact that a single person took the time and effort to put this together is a commendable accomplishment – and it’s filled with rare archival materials that make it an incredible treat for those of us who are interested in the history of the art form.