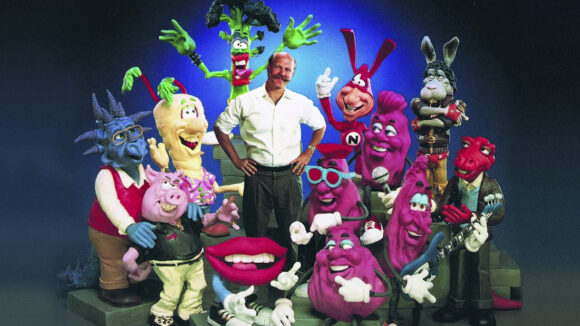 For the first time ever, a full-length documentary will tell the story of Will Vinton Studios, which launched in the late-Seventies in a Portland, Oregon basement and grew to an operation that employed hundreds and generated tens of millions a year in revenue, before meeting its ultimate fate – a takeover by Nike founder Phil Knight, who transformed it into Laika, the studio behind Coraline and Kubo and the Two Strings.

Welcome to My Daydream: The Story of Will Vinton is helmed by filmmaker Marq Evans, whose first feature-length documentary, The Glamour & The Squalor (2015), explored the personal and professional life of Marco Collins, the Seattle dj who popularized groups like Nirvana, Pearl Jam, Garbage, Foo Fighters, and The Presidents of the United States.

Evans is debuting the demo trailer for Welcome to My Daydream exclusively on Cartoon Brew today. Watch it below:

Evans says that he grew up a fan of the California Raisins and Vinton’s Eighties tv holiday special A Claymation Christmas Celebration, but hadn’t considered Vinton’s story until he ran across this story about him.

“The nostalgia of Will’s work brought me right back to being a kid and discovering his work for the first time,” Evans told Cartoon Brew. “What sold me though is that Will has truly a great story. I don’t want to give away too much of the movie for people that don’t know the story, but I became really excited about the potential for a movie when I realized how much material there is to work with.”

Evans pitched Vinton on the idea for the film over coffee in Portland, but Vinton turned him down, saying he wasn’t interested in the idea of a documentary. Over time – and with Evans’ persistence – Vinton warmed to the idea, and eventually gave Evans the rights to produce the film, along with unprecedented access to his personal archives.

“It’s been nothing but fantastic working with him,” says Evans. “We’ve interviewed him four times, spent time at his home with his family…He’s just such a nice guy and always available when we need him for an interview or just to meet up about the project. He’s really let me and the crew go off and do our thing, but anytime we need something such as an introduction to somebody we’d like to interview, he’s always super helpful.”

Evans tells us that there is still a lot of filming left to do, including more interviews and creative scene re-enactments. He will also use archival footage, and plans to produce original stop-motion segments with two new characters – Lodge and Randy – who live inside Vinton’s head and represent the left and right sides of his brain.

Will Laika chiefs Travis and Phil Knight participate in the documentary as well? Evans certainly hopes so. “We have not connected with them yet,” he says, “but I’m very hopeful to have their participation in the film. I really admire what Travis has done with Laika, and am of course a fan of his work.”

Evans is designing the film so that it will interest the widest possible audience, even those who aren’t necessarily familiar with Vinton’s body of work. “It’s my goal that we tell a great story and make a great movie, as exciting and entertaining as any film about a guy that’s setting off to achieve an impossible dream,” he says. “At its core, that’s really what we have here: a protagonist that sets off to follow his dream, and the accolades and obstacles along the way. I think this story has a really interesting arc to it that will hopefully draw people in outside of just animation fans.”

The project until now has been self-funded. Evans plans to launch a crowdfunding campaign in the near future to help raise additional funding to complete the film. To get updates on the film’s production, stay tuned to the official film website and Facebook page.