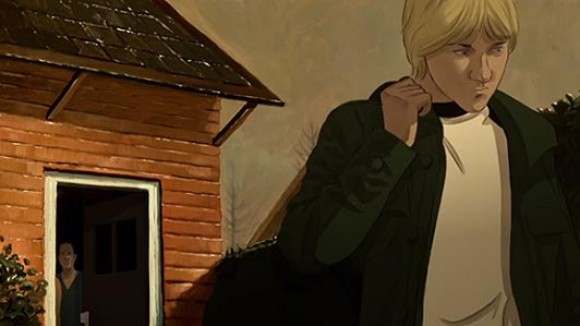 HBO and Universal Pictures International have released the trailer for the upcoming documentary Kurt Cobain: Montage of Heck, providing glimpses of the animated segments woven throughout the film.

The family-sanctioned documentary, which premiered to positive reviews at Sundance last January, draws on Cobain’s personal journal entries, drawings, home movies, and audio recordings, forming “a disjointed, disorienting look at fame” as experienced and endured by the troubled Nirvana frontman.

The animated component of the film, set to Cobain’s audio recordings, was led by Dutch filmmaker Hisko Hulsing, using the same techniques seen in his short film Junkyard. Via email, Hulsing confirmed that he and his crew of 18 animators made about six thousand drawings in a five-month period, with Hulsing himself painting some 55 oil-painted backgrounds.

A selection of Cobain’s own artwork also comes to life in the film, animated by Portland-based filmmaker Stefan Nadelman.

Documentary film director Brett Morgen has drawn heavily on animation in the past, most notably in Chicago 10: Speak Your Peace, his 2007 animated documentary about Vietnam-era anti-war demonstrators who were arrested and tried for conspiracy to incite riots.

Kurt Cobain: Montage of Heck will premiere May 4 on HBO.