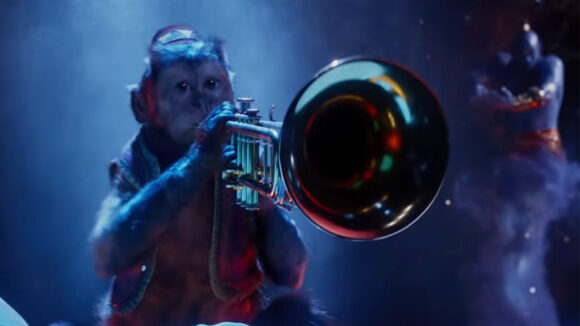 The Walt Disney Company released the first full trailer today for its hybrid remake of Aladdin, an animated film that it first released in 1992.

The trailer for the Guy Ritchie-directed film follows the formula that Disney has used in past trailers for remakes of films like The Lion King and Beauty and the Beast by closely replicating memorable moments from the original. The effect in Aladdin is especially underwhelming, especially in the case of the Genie, who in his few short clips pales in comparison to the virtuosic performances by supervising animator Eric Goldberg and deceased actor Robin Williams in the original.

Such comparisons may be largely irrelevant though since the target audience for the Disney film is children today, not adults who remember a film from 27 years ago. Audiences today will judge the film on its own merits, and so it remains to be seen whether the new film will have the same brash energy and fun as the original did. Judging from this trailer, the new film will be glossy and loud, but children will ultimately determine whether it’s fun to watch, too.

Vfx shops on Aladdin include Industrial Light & Magic, Hybride, One of Us, DNEG Stereo, Nvizage, and Proof.

The film is produced by Dan Lin and Jonathan Eirich, with Kevin De La Noy and Marc Platt serving as executive producers.

Actors are Will Smith as the Genie, Mena Massoud as Aladdin, Naomi Scott as Jasmine, Marwan Kenzari as Jafar, Navid Negahban as the Sultan Nasim Pedrad as Dalia, and Billy Magnussen as Prince Anders.