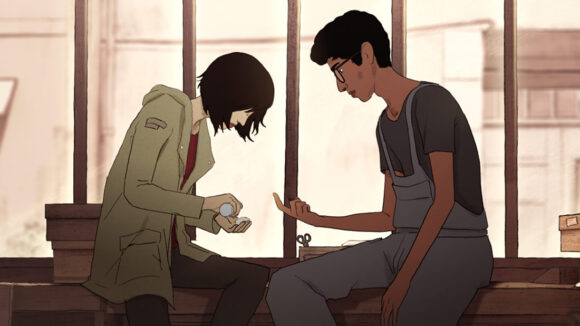 I Lost My Body is shaping up as one of the most exciting and original French animated features of the year. Directed by Jeremy Clapin and produced by Marc du Pontavice, Xilam’s founder and CEO (Oggy and the Cockroaches), the project was previewed to an enthusiastic audience yesterday at the 21st edition of Cartoon Movie, the pitching and co-production forum for European animated features that wraps up today in Bordeaux, France.

I Lost My Body’s logline is as weird as it gets: a severed hand has a life of its own and tries to reunite with the body from which it was detached…

Both the director and the product don’t want to reveal much more for fear of giving away too much of the story’s twists and turns. But one can tell the film will strike a dark chord, and will address a teenage and adult audience. Cartoon Brew exclusively reveals the film’s teaser trailer above and an additional exclusive clip from the film that is further down this piece.

Jeremy Clapin likes telling strange stories about the human body. His first short film, Backbone Tale (2004), was a romance between two lonely souls whose twisted spines prevent them from seeing each other. His second short, Skhizein (2008), César-nominated film and winner of an award at the Critics’ Week selection in Cannes, is about a man who has been struck by a meteorite and has to adapt to living precisely ninety-one centimeters from himself.

When Marc du Pontavice discovered his work in 2011, he thought he would be the ideal filmmaker to direct I Lost My Body, an adaptation of Happy Hand, a novel published in 2006 by Guillaume Laurant, a screenwriter known for his work on Jean-Pierre Jeunet’s Amélie. “I was struck by the dreamlike and poetic dimension of Clapin’s shorts,” du Pontavice tells Cartoon Brew. “Like in Skhizein, the main character of I Lost My Body, Naoufel, who lost his parents at a young age, finds it hard to fit in.”

Clapin was instantly attracted by the story concept: “The autonomy of a body limb is a very powerful idea,” he says. “It is absurd, but has to seem very real. The challenge was big: How do you create empathy towards a thing that doesn’t have a face?”

Du Pontavice was confident that animation was the only possible way to make the film: “Only animation can build the hand’s point of view, because it can characterize it.”

The adaptation’s writing was not easy, Clapin explains. “I started to work with [the original author] Guillaume Laurant, but he took a backseat. He is very respectful of the scriptwriter, as he is one himself. I wrote on my own, and honestly, I would not do it again. I tried to work with simple patterns: the hand and its body are like two beings made for one another, who are separated and try to get together again. All along its journey, the hand will remember its past life with Naoufel through flash-backs: a happy childhood in Morocco, dull teen years in Paris, the beginning of a fling with a young woman, and the separation from its body…”

After the script was completed, Clapin worked on the storyboard with Julien Bisaro, another César nominee (Bang Bang). It was a fruitful collaboration, because it established the visual identity of the film and the directorial choices. Says Clapin, “The memory of the hand is more sensory and fragmentary than Naoufel’s. It creates two points of view, two different scales I played with a lot.”

The art direction, too, is very different from his earlier short film efforts. The strange and stylized touch of his shorts gives way in I Lost My Body to a more realistic and colorful style. “I am closer to a live-action movie than I ever was,” says Clapin. “The props and setting must look palpable, like a ghost of realism. I mixed 2d and 3d and used them in order to have the qualities of each technique.”

Adds du Pontavice: “We kind of downgraded 3d with 12 images per second to avoid the photorealism trap. We used Blender, a free software that adapts itself easily to various artistic needs.”

The pipeline that was built could serve Xilam well for its upcoming projects. “We are developing series for adults and families on delicate topics like the ones raised by films like My Life As A Zucchini,” says du Pontavice. “We are going to submit the idea to Netflix-like platforms. Adult animation rarely goes into the kind of stories that deal with intimate matters.”

The long production of I Lost My Body has nearly wrapped. Two years were necessary for the scriptwriting, the storyboard, and the animatic. The financing buildup for the 4.6 million euros (USD $5.2 million dollars) budget took two other years.

“The project is so unusual that some funders couldn’t understand it”, says du Pontavice, whose own company put in a significant amount of the financing. I Lost My Body was also supported by National Cinema Center (CNC), and French regions, especially Réunion, a French island in the Indian Ocean, where part of the 3d animation was produced.

The film is due for release this year but no date has been yet announced. Its producer wants to submit it to Cannes film festival this year.