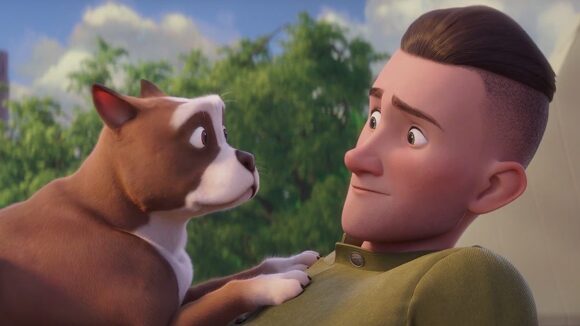 The family film offers a ‘dog’s eye view’ of American history. It’s based on the true-life story of a stray mutt who became the official mascot of an infantry regiment during World War I and participated in seventeen battles on the Western Front.

Stubby marks the first animated feature from Fun Academy Motion Pictures, a Columbus, Georgia studio that raised the film’s $25 million budget through a combination of private investment and production tax credits. The animation is produced by Mikros Image’s Montreal studio, where they also produced the animation for Dreamworks’ Captain Underpants: The First Epic Movie.

Richard Lanni (The Americans in the Bulge) directs from a script written by himself and Mike Stokey (Lanni is also the founder of Fun Academy). Voice cast is headlined by Logan Lerman, Helena Bonham Carter, and Gérard Depardieu, and score is composed by Patrick Doyle (Brave, The Emoji Movie, Cinderella).

With The War to End All Wars looming, a young Army “doughboy” Robert Conroy has his life forever changed when a little dog with a stubby tail wanders into training camp. Narrated by Robert’s sister, Margaret, Stubby and his new best friend quickly find themselves in the trenches of France and on the path to history. French poilu soldier Gaston Baptiste befriends the duo and accompanies them along their epic journey through harsh conditions and incredible acts of courage.