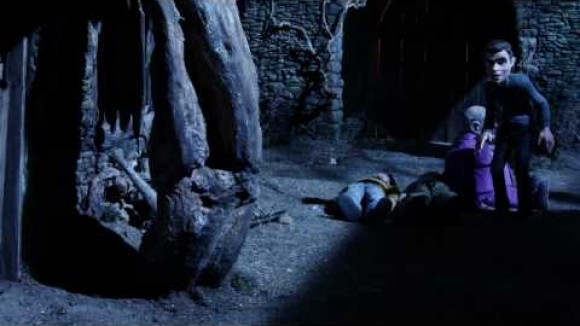 Here’s something that’ll jolt you out of any post-Thanksgiving Day lethargy: a creepy and suspenseful trailer for O Apostolo (The Apostle). The 3-D stop motion feature from northern Spain is directed and written by Fernando Cortizo. Animation director is Peggy Arel (Edison and Leo), head of the puppet department is John Craney (The Lord of the Rings), VFX supervisor is Colin Miller (Coraline), and Philip Glass composed the film’s main theme.

According to ION Cinema, the story is rooted in the “folklore, traditions and history of the north of Spain” and “revolves around an ex-con who arrives to a deserted town looking for a hidden treasure, but what he will find is a coven of dead elderlies looking for souls to trade with the reaper itself.”

Th film will be released in Spain next year, and Variety reports that it’ll also appear “on more than 1,000 screens across Latin America next year, with an emphasis placed on Mexico, Brazil, Argentina, Colombia and Venezuela.” As is often the case with animated features that skew mature, there’s no US distributor, though hopefully that will change. Another interesting bit about the production is that the filmmakers crowd-funded US$147,000 of the film’s US$9.6 million budget. Despite being a small portion of the overall budget, I’ve never heard of more money being raised via crowd funding for an animated project. A list of hundreds of donors is posted on their website.

More behind-the-scenes artwork and info about O Apostolo can be found on the film’s official website OApostolo.com.