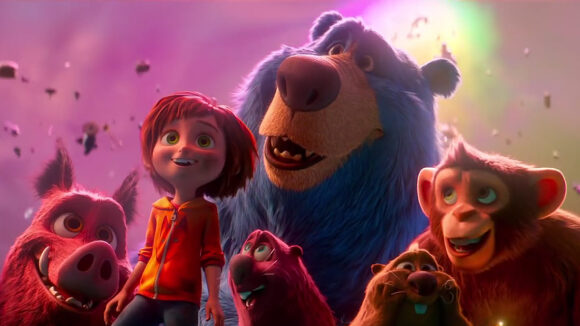 Paramount Animation has released a teaser for its next animated film, Wonder Park, due in U.S. theaters on March 15, 2019.

The film is about a young girl who discovers an abandoned amusement park, and learns about its magical properties, which apparently means lots of talking animals:

A teaser is supposed to do exactly that – tease, not reveal the plot of film. This one teases a location – magical amusement park – but it doesn’t tease any mystery or conflict that would make the viewer want to find out why it’s magical. Paramount expects us to be so awed by the sight of talking animals in an amusement park that we immediately reach into our wallets and purses and hand over our money. (To be fair, the film seems to skew younger than most family animated films, but here’s a tip: children enjoy mystery and conflict just as much as adults.)

It also looks like someone at Paramount is in love with Disney’s recent Dumbo teaser and asked for a copy of that: it follows the same general structure – a slow reveal of the film’s main subject with the suggestion of more to come, augmented by an ethereal tune (in Wonder Park’s case, the Louis Armstrong chestnut “What a Wonderful World”). But the similarities end there. The teaser for Dumbo, whether it ends up being a quality film or not, is effective in suggesting that the film contains a larger universe of emotions and stakes; Amusement Park’s teaser is claustrophobic, revealing its biggest trick upfront, with no suggestion of anything interesting to come.

To be perfectly clear, none of this is intended as criticism of the film. It might be a masterpiece for all I know. But the teaser itself is one of the weakest for an animated film in recent memory.

The only mystery at this point about the film is who’s the director. The director of Wonder Park, which was formerly called Amusement Park, had been veteran Pixar animator Dylan Brown, but he was fired in January following an internal studio investigation over allegations of “inappropriate and unwanted conduct.” A new director hasn’t been officially named by the studio.

The voice cast of Wonder Park includes Matthew Broderick, Mila Kunis, Ken Hudson Campbell, Jennifer Garner, Kenan Thompson, Ken Jeong, John Oliver, and Norbert Leo Butz. Actor Jeffrey Tambor was originally announced as part of the cast, but he too was removed after his own series of harassment allegations.

Wonder Park is scheduled for release on March 15, 2019. The vendor studio handling the animation on the film is Spain’s Ilion Animation Studios, which has also made Planet 51 and Mortadelo and Filemon: Mission Implausible. They are also animating the films from up-and-coming U.S. independent producer Skydance Animation.