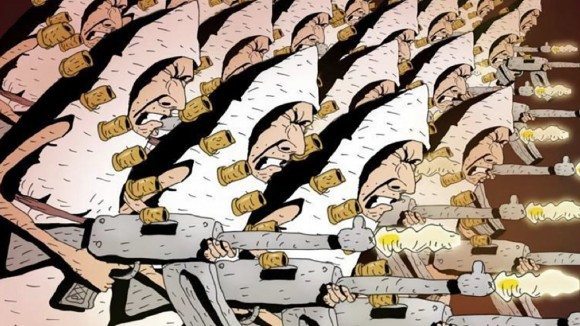 Animation legend Bill Plympton is back with a new animated feature — his eighth! — and Cartoon Brew has an exclusive look at the new trailer.

Plympton, who celebrated his 70th birthday last month, is shaking up his creative process by working on Revengeance with a creative partner for the first time. His collaborator, Jim Lujan wrote the film’s story about a low-rent bounty hunter who gets the assignment of his career when an ex-biker/ex-wrestler-turned-U.S. Senator hires him to find stolen goods and the woman who stole them.

Lujan, a self-taught animator, has a body of work almost as extensive as Plympton’s, albeit lesser known. His output includes over 50 shorts, spots for Adult Swim, music videos, and a feature-length film of his own, all of which have a distinctive point of view. “I tend to do stories about people like ex-boxers, DJs, cult leaders, stoner girls, fake superheroes, and other fringe members of society,” Lujan told Cartoon Brew. “Usually, the strangest characters are the supporting cast in films…in my films, they are the stars.”

The two artists met formally in 2010 when Lujan tagged along with a friend to interview Plympton for the Man vs. Art podcast. Lujan gave Plympton a DVD of his work, and a few months later, he received a phone call from Plympton who was interested in making a film using Lujan’s characters, designs, and stories. “I said a big fat yes!” Lujan said, and the two artists have been collaborating on the project ever since. Along the way, they raised over $90,000 in a Kickstarter campaign.

Lujan wrote the script, provided voices, and created character designs and backgrounds that Plympton re-interpreted in his personal style. “The voices were done here and there over the whole production of the film, always evolving,” said Lujan. (In addition to Lujan, voices are provided by Kristina Wong, Lalo Alcaraz, and Ken Mora.) “It was actually a really loose, fun process. We left a lot of room for Bill to improvise and do what he does best: his animation. Revengeance just gives Bill a roadmap to follow.”

While Lujan and Plympton have collaborated closely throughout the filmmaking process, Lujan has also given Plympton plenty of space when it comes to his iconic animation. “Ultimately, this is Bill Plympton having fun, creating something interesting and cool,” said Lujan. “I’m having a really good time working on this, too.”

Plymptoons, the Manhattan-based studio where Plympton creates his films, is currently putting the final touches on Revengeance and getting it ready for the festival circuit. Producer Wendy Cong Zhao says the studio plans to submit it to the major fall festivals –Toronto, Venice, and Telluride — before a wider festival run. A VOD release, similar to how Plympton’s last feature Cheatin’ was made available on Vimeo on Demand, is likely though unconfirmed at this point.

For more information about the film, stay tuned to RevengeanceMovie.com.