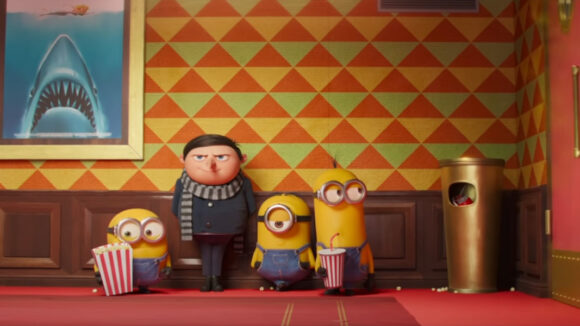 SPOILER ALERT: This article describes the final scene of Minions: The Rise of Gru.

Universal may be one of the few U.S. distributors finding joy at the Chinese box office these days, but even its family-friendly and mostly apolitical films have managed to create controversy in that country.

Illumination’s Minions: The Rise of Gru premiered in China last week, and audiences were quick to notice a sloppy bit of editing done to the film’s finale.

At the end of the latest Minions’ flick, Gru and his mentor Wild Knuckles ride off into the sunset like a pair of true antiheroes. For most of the world, that’s all there is in this installment. In China however, an extra bit of text narration is superimposed which explains that Wild Knuckles was eventually tracked down and imprisoned for 20 years following a failed heist, while Gru “returned to his family” and to his “greatest accomplishment” of being a father to his three girls.

The changes were first pointed out by users of the Chinese social media site Weibo, with many users mocking the poor quality of the PowerPoint-like addition. Others claimed that the post-film text is propaganda in support of China’s three-child policy, as the country tries to raise its birth rate. (For decades, the Chinese government restricted the number of children per couple and only repealed those policies.)

DuSir, a popular film blogger on Weibo with more than 14 million followers, called the changes outrageous and questioned why anyone would think that Chinese people needed the extra bit of exposition to guide their moral compasses.

“It’s only us who need special guidance and care, for fear that a cartoon will ‘corrupt’ us,” he posted.

Minions managed to hit third at the mainland Chinese box office in its first weekend, pulling in $11.6 million.