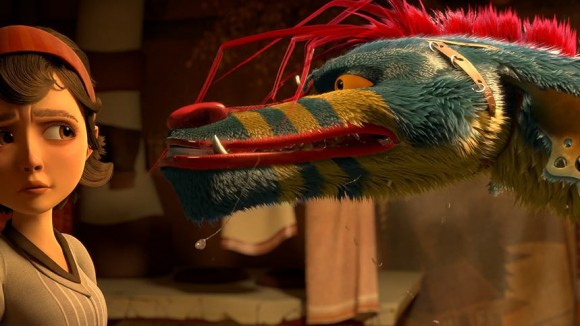 Locally-produced feature animation continues to heat up around the globe, including Russia, where Savva: Heart of the Warrior was released a few weekends ago. The film is spearheaded by a celebrity director, Russian pop composer/producer Maxim Fadeev, who based the story on an earlier children’s book he’d written.

The film has performed respectably since its debut, launching in second place at the Russian box office with $1.4 million, and grossing $2.6M to date. It has also appeared in Poland’s top ten for the last two weekends. Savva follows a boy’s quest to free his family’s village from a lethal group of hyenas. Here’s the trailer:

Although Savva has a celebrity Russian voice cast, the producers — Fedor Bondarchuk and Dmitry Rudovsky’s Art Pictures Studio — also anticipated an international release by putting together an English-speaking cast that includes Milla Jovovich, Whoopi Goldberg, Sharon Stone, Will Chase, and Joe Pesci. It’s unlikely that the film will reach U.S. theaters in any significant way, but the movie’s international rollout is just beginning, with a screening next month at the Dubai International Film Festival, an opening in Hungary on December 17, followed by a launch in Bulgaria on January 8, 2016.

Fadeev wrote the screenplay with Aleksandr Chistyakov and Hollywood screenwriter Gregory Poirier, who was one of about a dozen writers on The Lion King II: Simba’s Pride and the original writer on National Treasure: Book of Secrets. Fadeev, of course, composed the high-energy soundtrack, and performed the title tune “Breach the Line,” which reached the top 10 on Russia’s iTunes earlier this year:

The animation produced by Moscow-based Gluk’oza Production shows ambition. As evident from the trailer, they don’t pull off every shot, but on the whole, production values are high for a Russian CG film and compare favorably to another homegrown Russian hit this year, Snow Queen 2. Even if all the characters and settings don’t quite fit together into a cohesive universe, the film packs plenty of quirky visuals that should capture the attention of its target audience.