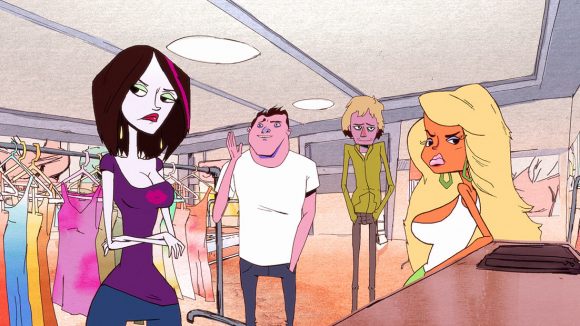 Samuel Goldwyn Films is jumping on the R-rated animation trend by securing North American rights to the indie comedy Nerdland. They will release the hand-drawn film sometime in December of this year.

Nerdland marks the feature directorial debut of Chris Prynoski, whose studio Titmouse (Metalocalypse, Motorcity, Son of Zorn) produced the project. In the film, slacker pals Paul Rudd and Patton Oswalt portray a struggling actor and screenwriter who hatch a plan to achieve-instant fame by the end of the day at all costs.

The film has played the festival circuit since premiering at the Tribeca Film Festival last April, and will screen this weekend at Beyond Fest in Los Angeles.

“Nerdland is a personal favorite of mine,” said Samuel Goldwyn Films president Peter Goldwyn. “It’s rare to be able to work with such a wealth of talent on a film that is so original and unapologetic.”

Nerdland marks the fourth R-rated animated feature to receive a significant release in the United States in the last year. The others are Anomalisa, Sausage Party, and the limited event-style release of Batman: The Killing Joke.