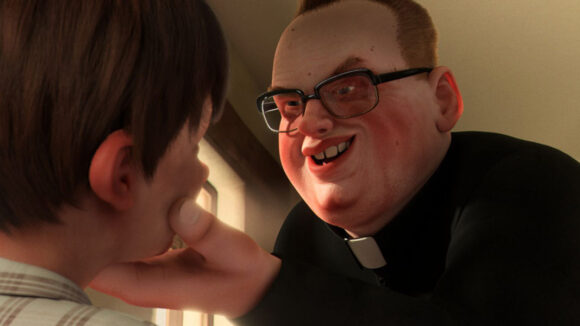 Sometimes you don’t realize how much everything looks the same until you see something that looks truly different.

That’s the feeling I get from watching the trailer for Snotty Boy, a new co-production from Austria and Germany that will premiere in competition next week at Annecy:

The designs verge on the grotesque, but so do real people. We’re so accustomed to generic cartoon symbols of humans in cg animation that it can be jarring to see animated figures who look like caricatures of actual people. The filmmakers didn’t have to develop the style from scratch: the designs are based on the work of Austrian cartoonist Manfred Deix (1949-2016), whose life story also inspired the film’s plot:

Picture Tree International has world sales rights to the film and is shopping it around. No U.S. distributor has been announced yet.

Following its Annecy debut, the film will next screen as the closing night film of the Munich Film Festival. The film has late summer theatrical releases slated for Austria (through Filmladen) and Germany (Pandora Film).