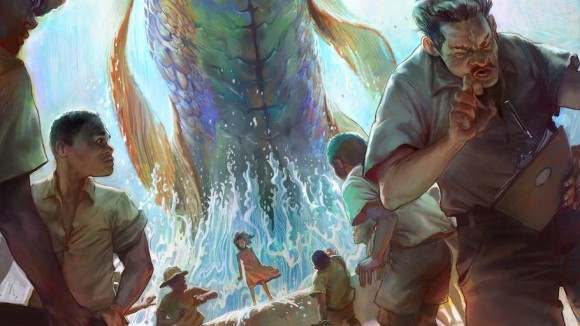 Earlier this week, the Blue Forest Collective, a team of artists based in South Africa, scored an online hit with their proof-of-concept teaser trailer for a proposed hand-drawn feature called Kariba. In three days, it has racked up an impressive 150,000 views:

The Blue Forest Collective comprises Daniel Clarke, Jac Hamman, Charl Collocott, and Daniel Snaddon. Clarke, the director of the project, is a concept artist who has lent his skills to several animated projects in South Africa in recent years, including as production designer of Triggerfish Animation’s feature Khumba. He is also a fine artist, preparing for his first solo exhibition later in the year.

Kariba was selected, along with two other projects, for a South African pitch session at Annecy’s MIFA market next month as part of a special South African call for entries.

The team has decided to pitch Kariba as a short film at MIFA, where the eventual winner will get to collaborate with an as-yet-unnamed French animation studio to realize the project. “This would be a great opportunity to test the team, the pipeline, and create a more meaty proof of concept before we tackle the feature,” Snaddon told Cartoon Brew via email. Snaddon is currently also co-directing Stick Man, Magic Light Pictures’ follow-up to The Gruffalo and Room on the Broom.

Kariba was conceived as a modern African fairy tale, combining the historical events surrounding the building of the Zambezi river dam wall and the local legend of the river spirit that caused its destruction. “We are using the rich history and mythology around this event,” Snaddon said. “Our aim is to make something that stands out as being uniquely African, a film that respects both its source material, and its audience, while being hugely fun and entertaining.”

The 2D animation in the teaser was made using a combination of TVPaint and Photoshop with the AnimDessin 2 plugin, as well as After Effects and Softimage XSI for the underwater shots. The team’s Johannesburg partners, Mind’s Eye Creative, used Toon Boom to make some of the more sophisticated looking water effects.

The team is keeping an open mind about funding possibilities, Snaddon says. Judging by the huge response to the trailer, crowdfunding would appear to be an option, but the film’s forecasted budget of US$12 million will require other funding as well. “We have a couple of soft funding options we’re going to explore, including the National Film and Video Foundation, and our Department of Trade and Industry, who have some very competitive rebate packages for film production. We’re also talking to local producers and backers to see who has an appetite to take on something like this, but creative control is paramount to us, so it would be a case of finding the right partner.”

The Kariba team hopes that they’ll eventually be able to collaborate on the production with a European partner. “Countries like France, Ireland, Denmark and Spain have shown an explosion of really exciting young talent in the past 10 years,” says Snaddon, “and we’d love to see what this new generation of 2D animators could bring to Kariba.”

Check out the team’s concept art for the project below.