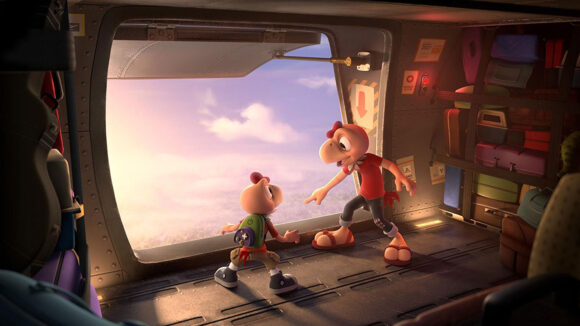 After release across half of Latin America last October with strong performances that topped the box offices in Chile, Peru, and Colombia, the Peruvian production Condorito: The Movie (Condorito: La Pelicula) opens in limited American release today through Lionsgate and Pantelion Films.

With a production cost of over $8 million, Condorito is a high-budget movie by Latin American standards. The movie is also the latest example of how Latin American studios are becoming increasingly confident at producing and selling quality animation on an international level.

Condorito is the first movie adaptation of one of the most enduring comic strips from South America, with long-lasting success that reaches contemporary readers. The character, created in 1949 by the Chilean cartoonist Pepo (alias of René Ríos Boettiger), was a response to what he felt was an underrepresentation of Chilean national identity in Disney’s Saludos Amigos. (The 1942 Disney movie portrayed Chile as a relatively minor character, embodied by the clumsy mail plane Pedro, who carries his mailbags over the Andes.)

However, according to scholar Juan Poblete in the article “Condorito, Chilean Popular Culture and the Work of Mediation,” Disney’s influence, and especially the Donald Duck comic strips, were also key to the character’s design and the structure of the stories.

After a continent-wide survey to uncover Latin America’s most cherished characters, Condorito’s franchise potential became obvious for Aronnax Animation Studios, a company founded in Lima by Peruvian film producers Hugo Rose and Abraham Vurnbrand in 2009. It is the company’s third feature-length cg animation production, after The Illusionauts (2012) and The Nutcracker Sweet (2015).

Carton Brew spoke to Aronnax Animation Studios’ Hugo Rose, who produced Condorito, and Alex Orrelle and Eduardo Schuldt, the two co-directors, via phone and email to discuss details of the production and what it means for animation from the Andean region.

Cartoon Brew: Why did you decide to adapt Condorito’s comic strip and what other Latin American characters have you also considered?

Hugo Rose, producer: Before deciding on the character, we conducted a survey across South America to discover the most marketable Latin American intellectual properties. The survey revealed many popular characters that worked well at a regional level, but only Condorito drew universal recognition throughout the continent, along with Mexican tv show El Chavo del Ocho and Argentine comic strip character Mafalda.

However, where Condorito clearly stood out as the survey’s most popular character was in his capacity, paradoxically, to provide local appeal across the entire continent. The character is so well embedded that most of our respondents, regardless of where they were from, thought that Condorito’s country of origin matched their own.

What were the biggest challenges in adapting the Condorito comic strip into animation?

Eduardo Schuldt, co-director: As this was the first time that Condorito was animated [in computer animation], the hardest part was bringing the flat style of the comic strip into the three-dimensional world of the movie. This involved a lot of trial-and-error. For example, certain positions that look natural in the comic books were very confusing or unappealing on camera. We had to modify them quickly or avoid them altogether. Several initial designs, including a stylized version of the main character, where rejected by test audiences.

How were the tasks split between both co-directors?

Orelle: I was working in development for smaller projects at Aronnax Animation Studio for a couple of years, including films for theme parks and a proof-of-concept for a feature film. When the studio owners Abraham Vurnbrand and Hugo Rose got the license to make Condorito, they offered me a directing role alongside Eduardo. Eduardo had made a number of animated films in Peru, so he knew the people and the culture, but my experience with Pixar and Warner Bros. was important to give Condorito more of a global appeal. We also had a natural professional split between us, with Eduardo being much stronger in the technical aspects of production, and my strengths lying in story and character performances.

Schuldt: All the decisions and ideas were bounced back and forward between the two of us. This led to greater conversation, which slowed down production a bit, but ensured better results.

How did Condorito’s movie connect with your previous careers as directors?

Orelle: My career started in San Francisco after studying at the Academy of Art University, where I experienced big studio production, especially at Pixar. When I moved back to Israel, my wife and I started a modest, self-funded studio that produced animation for clients on a range of budgets (though mostly at the low end of the range), and this taught me a lot about the reality of independent animation, and about how great artistic talent is worthless without good management. Later, working as an animation director on a big live-action hybrid in Hollywood [Yogi Bear], I learned a lesson about bringing a classic tv animation brand onto the big screen. A character is often loved because of how cheeky and unconventional it is, and expensive theatrical polish can hurt that appeal. Modest budgets and aggressive schedules are great because they restrict the layers of noodling that can kill a lot of raw and eccentric choices, especially for a new director. This was the perfect first directing opportunity for me.

Schuldt: The only difference for me was the complexity and scale of the production, with a bigger budget than any of my seven previous feature films. My first movie cost less than $260,000 and involved a team of 11 people working for 11 months in a garage, while Condorito’s Peruvian team alone involved over 150 people working with the latest technology.

The movie was privately funded by Aronnax. Why did you take this risky financial approach? Was it too hard to get co-producing partners or state support?
Rose: We opted to fully fund ourselves because Peruvian state support at the time, usually only half-a-million or a million U.S. dollars, was not substantial enough for our required budget. A new national film law for Peruvian cinema was recently approved, which may change this in the near future though. Also, securing funding before having an international reputation was difficult. Once Fox joined the project, it was easier to gain wider trust. However, with or without Fox, we would have completed the movie.

How long did the movie take to complete?

Rose: Negotiations with World Editors, Condorito’s international licensors, started in 2013 and took over a year. We began scripting in 2014 and film production took 32 months to complete.

How big was Condorito’s team and how did you coordinate production tasks?

Rose: The artistic team was composed of nearly 180 people, of which 120 were Peruvian, 150 at the highest point. The rest of the team, including Alex Orrelle, worked remotely from a range of locations including Argentina, Chile, Ecuador, Colombia, Mexico, and Spain. Nearly 200 people were involved in technical and organizational tasks. The total crew fluctuated between 350 and 380 people.

Orrelle: I worked from my home in Israel. It worked out mostly thanks to the great department leads and managers, who made sure I had work to review offline every morning. It also required daily video chats to connect with the crew and make sure everyone was clear on where we were going.

What do you think this movie will mean for the Latin American animation market?

Schuldt: It will turn the attention of the international market onto Latin American studios and professionals, which helps local artists to grow. Most of our crew is working abroad in big studios right now. It also draws attention to young talent, helping them realize that animation isn’t only a hobby, but potentially a beautiful and thriving career choice.

Rose: I hope the movie creates a model for other Latin American productions to work on a pan-American scale. These kinds of productions are so expensive for single studios that only working with this cooperative, outward-looking mentality can ensure investment is recovered.

What reaction do you think the movie will generate when it is released for U.S. audiences?

Orrelle: I don’t know, but I hope it will create curiosity. The animated film market is so saturated that it’s hard to stand out.