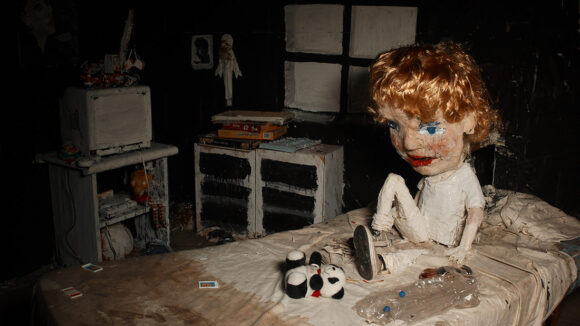 La Casa Lobo (The Wolf House), which premiered at the 2018 Berlin International Film Festival and was awarded a jury distinction prize at the latest Annecy International Animation Festival, is a daring stop motion movie animated with life-size figures and filmed in a single sequence that draws on the grim traditions of European fairy tales as it examines some of the darkest pages of recent Chilean history.

The feature screens today and Thursday at the Festival du nouveau cinéma in Montreal, Canada.

Cartoon Brew spoke to the film’s two directors, Cristóbal León and Joaquín Cociña, at the Annecy festival last June about the inspiration, development, and unorthodox artistic methods used to create this one-of-a-kind animated feature, including the ten self-imposed rules that the filmmakers set up for the production.

The Wolf House follows Maria, a young German-Chilean woman who, escaping from an unseen danger — the wolf of the title — takes shelter in a run-down house inhabited by two mutating, anthropomorphic piglets.

Drawing on the fable of the Three Little Pigs, the plot was inspired by the true story of the ‘Colonia Dignidad’ (Dignity Colony) in Chile, a secretive organization founded by German émigrés in the decades after World War II. Dignity Colony was controlled from the early 1960s through the late 1990s by the notorious former Nazi and child abuser Paul Schäfer. The colony-turned-cult was supported by successive far-right Chilean politicians and collaborated with Pinochet’s dictatorship, serving as a secret camp for detention and torture.

Unsettlingly, La Casa Lobo is narrated by a portrayal of the colony’s leader, Schäfer. The disturbing idea of converting a child rapist and political murderer into the movie’s narrator was influenced by an extensive archive of the colony’s audiovisual material, studied by the filmmakers during research for the movie.

As Cristóbal León explains, these videos and pictures, which portrayed happy family scenes and members playing sports, were in fact propagandized cover for a gender-segregated community where children were separated from their parents, and sex and relationships were forbidden. “Using this material as a starting point,” says León, “we imagined the movie as propaganda to prevent members’ decampment.” The film’s tone was conceived as “Paul Schäfer’s imaginary, lost film, as if he had attempted to become a South Chilean version of Walt Disney,” but could only ever amount to a poor, neo-Nazi version of the latter.

The sinister presence of these historical elements is in fact a coming to terms with Chile’s recent past. “Our main intention,” reflects León, “was to transform this political horror into a horror fairy-tale.” During the research process, the filmmakers discovered that the German members of the community used to call their Chilean neighbors ‘schweine’ (German for ‘pigs’). This led them to conceive of the two children in the story as piglets, and depict their progressive transformation into Aryan humans as an ironic joke aping the community’s racial ideology.

León acknowledges a particular obsession with fairy tales and the way Chilean colonial culture could contribute to them. “Fairy tales have always been a natural source of inspiration for animation,” he explains. The directors were more drawn to the original fairy tales as documented by the Brothers Grimm and other writers, that don’t omit perverse details such as rape, murder, and incestuous relationships.

Key influences during film production were the works of British painter Francis Bacon and David Lynch’s Eraserhead (1977). Adds Joaquín Cociña, other sources of inspiration such as Jan Svankmajer, Brothers Quay, and William Kentridge were not directly referenced but, as part of the filmmakers’ cultural background, inevitably influenced their work.

The directors, who studied different art disciplines at the University of Arts in Santiago, shared a mutual interest in combining animation and visual arts. Together with the American director of photography Niles Atallah, they directed the animated shorts Lucía (2007) and Luis (2008). Many of the cinematic traits characterizing La Casa Lobo are already visible in these earlier works, like the use of large-scale sets, the technique of wall-painted animation, the claustrophobic dream-like staging, and the voice-over narrator.

Production of La Casa Lobo was funded through several artist-in-residency grants in Europe and Latin America. Being hosted by these organizations allowed the filmmakers to spare expenses such as traveling costs and office rent.

The duo accepted offers to stay at art galleries and museums provided visitors could watch them during the animation process. León explains that this decision allowed them to simultaneously exhibit their work and make progress on filming through the entire movie production period. He adds that for five years, “our installations consisted of a small model house with us working inside along with the puppets and technical equipment.”

Filming didn’t follow a specific order, starting with the fire scene from the second half of the film and then going back to the beginning to shoot the first half, before eventually re-shooting certain segments again. This allowed for several script changes and improvements. Even the artistic techniques evolved during the process, with a growing preference for model animation over the wall-painted technique.

Due to the open and experimental nature of the project, and the fact that they kept rewriting and amending the script during filming, the filmmakers set themselves ten rules to impose some creative restrictions. These rules, based on their experience with previous short films, were:

This set of rules served to speed up the animation process. For example, rule eight negated the risk of accidentally moving the camera. But they also posed some additional problems. As the movie was shot in various different art galleries and workshop spaces, rules four and five presented a challenge, but were overcome by zooming into a portion of the frame during transitions to new studio locations.

Despite their interest in other disciplines, animation remains important to both filmmakers. León does not have an immediate project planned but promises to come back to animation again in the future, describing it as “the only artistic medium that allows the combination of all the disciplines that interest me most,” including literature, sculpture, painting, sound, and music.

León’s current project is the animated short film Strange Creatures, adapted from the children’s book of the same name. The book was co-written by Cristina Sitja, who also provided the illustrations and will co-direct the film, scheduled for release in 2019.

La Casa Lobo (The Wolf House) is currently playing on the film festival circuit around the world, including this week at the Festival du nouveau cinéma in Montreal, Canada.