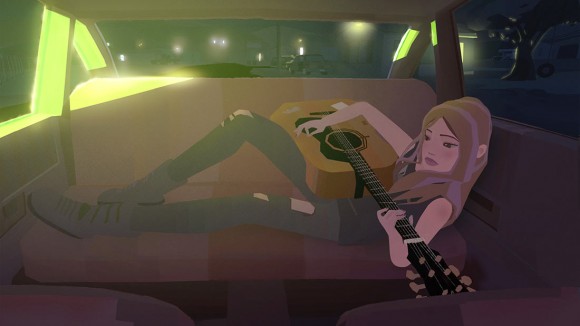 The 2016 Tribeca Film Festival, taking place from April 13–24, has announced its complete film line-up, and while animation doesn’t play a big role in their programming, they will offer the world premiere of one animated feature, and screen 12 animated shorts out of competition. Why are they not showing animation in competition like Sundance, SXSW, or Cannes — who knows?

The feature film debut will be for Nerdland, the R-rated directorial debut of Titmouse founder Chris Prynoski that we wrote about earlier this month.

On the short side, the notable premiere will be Pearl (pictured, top and below), the new short from Patrick Osborne, who directed Disney’s Academy Award-winning short Feast. Osborne made Pearl for Google’s Spotlight Stories, but like some of the other shorts created for the interactive shorts initiative, like Glen Keane’s Duet, Pearl also has a non-interactive festival version.

Osborne’s six-minute CG film follows a father and daughter on the road together, “tracing his struggles to make it as a musician and parent, and her coming-of-age and musical journey to fulfillment.” The film will debut in Tribeca’s music-driven shorts program “Rock and a Hard Place.”

Most of the other animated shorts will be screened as part of a program called “Whoopi’s Shorts,” curated by actress/talk show host (and noted cartoon fan) Whoopi Goldberg. The films in her program are as follows:

The remaining animated shorts are spread out throughout the festival’s other short film programs: