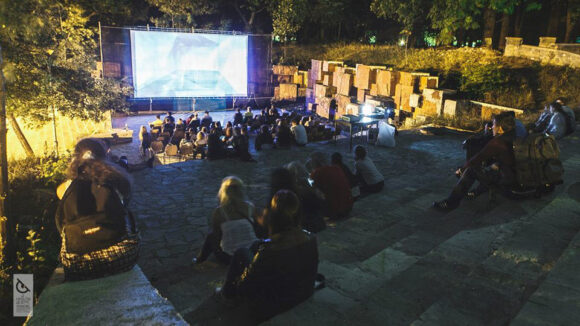 The Anibar Animation Festival started in Peja, Kosovo on Monday and continues through the end of the week.

If you’re thinking that Kosovo sounds like an unlikely place for an animation festival, well, you’d be right. A small landlocked country in the Balkan Peninsula, its size slightly smaller than Connecticut, the territory is mostly known to Americans from newspaper headlines. It was the site of a brutal war that took place in the late-1990s. The war ended following a U.S.-led NATO intervention, though tensions continue to simmer between Albanians and Serbs, and the existence of the country remains disputed.

Peja, where the festival takes place, is one of the larger cities in Kosovo with a population of just under 100,000. During the war, 90% of the buildings suffered damage, with many burned down completely. Today, at least in the city center of Peja, the outward signs of conflict have been erased, and the country has found more urgent problems to deal with, like poverty and an unemployment rate that hovers around 30%.

And in the middle of it all exists Anibar, a growing festival that is embarking on its eighth edition. The story of how the festival came to be is almost as unlikely as its location.

Anibar was founded unofficially in the mid-2000s by a group of teenagers who were no more than 15 years old. “We were trying to make our own animated films,” festival co-founder Vullnet Sanaja told me. “[We were] writing up stories and drawing storyboards, trying to set up scenes and doing some stop motion clay animation, however, we were never able to finish any of our films. We realized we need more people and more skills to finish a film, and a festival looked like the place to have them both.”

Sanaja and festival co-founder Rron Bajri were unable to travel abroad due to the difficulty of obtaining visas, so they decided to bring the festival to them. They waited until they turned 18, at which time they started a non-profit organization. With just a few hundred euros and copies of films that they cobbled together from friends and acquaintances, Anibar officially came into existence in 2010.

Soon, other local teens, like Petrit Gora and Rozafa Imami, began to pitch in with organizational tasks, and the festival grew. Now, in 2017, it has turned into a full-fledged festival attracting important guests from across Europe, as well as Asia and North America.

Because of its location — in an economically-depressed country still not fully healed from the wounds of war — Anibar cannot help but be more than just a festival. Its very existence, and its birthing by a group of young local animation fans, has turned it into an important symbol of the cultural rebirth of Peja.

The festival took over the city’s only movie theater – Jusuf Gervalla Cinema – which shut down after the war and lay dormant for over a decade. “The idea is through the festival to help engage as many people to start caring for the commons: the public spaces and buildings,” said Sanaja, who is the now the director of the festival.

This year, the festival pushed one step further, and proclaimed their theme to be “Reclaiming the City.” It comes at a time when Anibar is becoming more active in its advocacy efforts. “We are mapping all of the empty public buildings around the city that can be used as art centers,” Sanaja said, “and then we are inviting the whole community at the cinema to show films on how public spaces are revitalized throughout the world and trying to animate our own community.”

Empowering the community and having them engaged in cultural activities is not just an act of goodwill, it’s a necessity. “It has become very difficult to organize the festival with the lack of public spaces,” Sanaja said. “We believe that when the communities become engaged, we can be able to start using the abandoned spaces and buildings for the benefit of the many.”

And that necessity for civic engagement is backed by a sense of urgency. Following the war in Kosovo, many of the country’s state-owned enterprises have undergone privatization. A number of the cinemas in the country have been bought by businessmen, who have torn them down to build apartment blocks and parking lots.

Anibar is trying to prevent its precious Jusuf Gervalla Cinema, which opened in the 1950s, from suffering that same fate. Last January, the organization received a 15-year lease from the municipality of Peja that would allow them to revitalize the cinema and present year-round film screenings as well as workshops for young filmmakers. A key goal is to fundraise enough money to buy a digital projector so they can screen new Hollywood films.

However, a couple months later, the Privatization Agency of Kosovo (PAK) unexpectedly announced that the building would be liquidated and sold to the highest bidder. “This was quite shocking,” Sanaja told me, explaining that they had carefully followed all the procedures and filled out mountains of paperwork to receive a lease from the local government.

The festival organizers sprung into action, immediately launching a campaign to save the cinema from liquidation. They received a groundswell of support, including the mobilization of dozens of the country’s cultural groups and over 6,500 signatures on a petition to halt the liquidation.

Combined with extensive coverage in the media, the privatization agency was pressured to return to the negotiating table with the Peja municipality and work to find a solution that would prevent Peja’s only cinema from being torn down. For now, the cinema’s fate remains in limbo as it sits on the government agency’s liquidation list.

In the meantime, the festival continues.

This year, Anibar received a record 2,700 film entries. They selected 213 films for competition, their biggest competition program yet. As in years past, some of the films are screened in an outdoor park, in improvised open-air cinemas; the festival makes good on its pledge to use public space for cultural enrichment.

There’s a diverse slate of programming beyond the competition programs as well. Those programs including a presentation by Swiss animation legend Georges Schwizgebel, a masterclass by Aya Suzuki (animator on The Illusionist, Ping Pong, and Wes Anderson’s upcoming Isle of Dogs), numerous multi-day animation workshops including a stop motion class by Eileen Kohlhepp (animator on Anomalisa and Robot Chicken), a presentation by TED-Ed producer Gerta Xhelo, a retrospective of Dutch studio Frame Order (whose film Golden Oldies appeared recently in CB Fest), and a screening of the Australian classic Grendel Grendel Grendel which will presented by Malcolm Turner, director of the Melbourne International Animation Festival.

Anibar recognizes that animation is still a foreign art to much of Peja’s younger population, so they try to slip animation into more recognizable social evnents. Every night during the week of the festival, they put on an open-air concert headlined by a well known local DJ or band, and in between sets, the animated music videos in competition are screened for the attendees. It’s a novel way of exposing the masses to animation art.

Anibar is an animation festival, but as it proves year after year, it’s also much, much more.