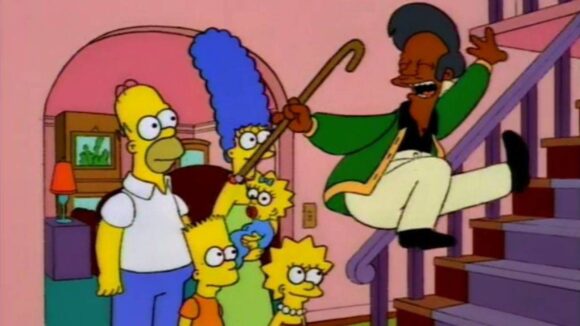 Is Apu Nahasapeemapetilon from The Simpsons a racial stereotype?

That’s the question with a rather obvious answer that comedian Hari Kondabolu tackles in his new feature-length documentary, The Problem With Apu. In the film, Kondabolu looks at “how this controversial caricature was created, burrowed its way into the hearts and minds of Americans, and continues to exist – intact – twenty-eight years later.”

The number of people defending Apu only proves that @harikondabolu's documentary is relevant & necessary. Congrats to my friend!👏🏿👏🏿👏🏿👏🏿👏🏿👏🏿 https://t.co/MCRYzYVqrk

One of the documentary’s key points is that Apu was among the very few representations of a person of South Asian background on American television in the late-’80s and early-’90s:

While The Simpsons isn’t at fault for being the only piece of American entertainment to include a “South Asian” in their cast, they are at fault for consciously designing the character to be insulting. Hank Azaria, the white man who performs Apu – or as Kondabolu puts it, “a white guy doing an impression of a white guy making fun of my father” – has said that when he was offered the role, the show’s entirely white writing staff asked him: “Can you do an Indian accent and how offensive can you make it?” (Azaria declined to participate in the documentary despite repeated requests.)

From that perspective, The Simpsons is part of a long tradition of mainstream American entertainment that uses stereotypes and racial humor for cheap comedic effect. Only now is that outdated tradition being scrutinized anew as more and more people of color assert their position in the entertainment world hierarchy.

The place of The Simpsons in animation history is undeniable. It was a groundbreaking show in its time, and its positive qualities outweighed its, at times, antiquated approach to comedy. But it is also a time capsule from another era – an era when a homogeneous group of white men from similar backgrounds could sit around and make fun of everyone who was not them under the guise of being equal opportunity offenders. Unquestioned were the dynamics that allowed them into that role in the first place, while denying it to so many others.

In truth, there is no such thing as timeless comedy. Any comedic effort will be perceived differently in subsequent generations than the time in which it was made. That’s the sign of a healthy and evolving society. The complicating – and fascinating – twist of The Simpsons is that new episodes continue to be produced a generation later, using the archaic framework of an earlier era. It’s that incongruous clash of older values and contemporary “wokeness” that has led to a documentary like this.

Directed by Michael Melamedoff, The Problem with Apu will premiere on TruTV next Sunday, November 19, at 10 ET/PT.