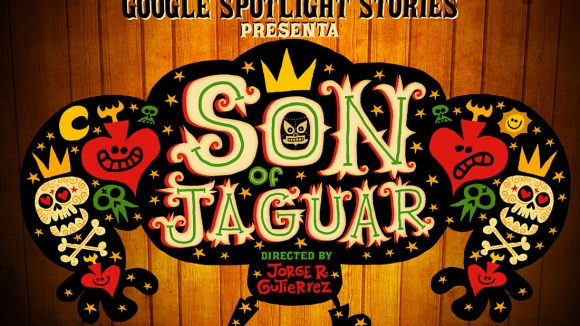 The Book of Life director Jorge Gutierrez will make his next project, Son of Jaguar, for Google’s Spotlight Stories project.

“[Jorge’s] totally unique voice and point of view is what drove me to chase him over the last year-and-a-half to land him into getting him to do our next Google Spotlight story,” Karen Dufilho, executive producer of Google Spotlight Stories, told Cartoon Brew.

Gutierrez was convinced to give the vr format a shot after he saw filmmakers and animators like Keane, Osborne, and Tindle creating Spotlight Stories. “I genuinely felt what’s wrong with me,” he says. “As a filmmaker and an artist, I need to embrace the things that scare me. I was very much terrified, and it felt good because I haven’t been scared in a long time of the medium.”

Gutierrez says that his lucha libre-themed short will deliver on the promise of the Mexican wrestling movie posters that he loved as a kid. The films themselves were “awful” and never lived up to the thrilling poster imagery, but now Gutierrez feels he has an opportunity to finally enter that world through vr. “I was that little kid in the movie theater who would run up to the screen at the end of the movie and just touch it because I wanted to go inside.”

Son of Jaguar will continue to build on themes that Gutierrez has explored in Book of Life and his Nickelodeon tv series El Tigre: The Adventures of Manny Rivera (co-created with his wife, Sandra Equihua):

The project officially started last week and is expected to be completed sometime in summer 2017. Reel FX, the Dallas, Texas-based animation studio that made Gutierrez’ The Book of Life, will produce the animation for the project. The Book of Life’s art director Paul Sullivan is onboard the project, and Sandra Equihua will contribute character designs.

David Eisenmann, who produced Patrick Osborne’s Spotlight Story Pearl (currently shortlisted for an Academy Award), will produce Son of Jaguar. Speaking about how Son of Jaguar will be different from earlier Spotlight projects, Eisenmann says, “This piece has a very good promise of investigating a first-person point of view in a narrative-driven vr piece, which we don’t feel has been out there that much. We’re going to give it a try.”

Gutierrez has some other goals in mind too with his first vr project. “Emotion is the thing that I’m the most obsessed with and trying to get you to feel things, so my hope is that we kiss you in the mouth, and then slap you, and then kiss you again.”

“And then punch you in the stomach,” Eisenmann adds.

“And then have you throw up love,” Gutierrez concludes, before adding, “And then you take off the goggles and you grow a mustache.”