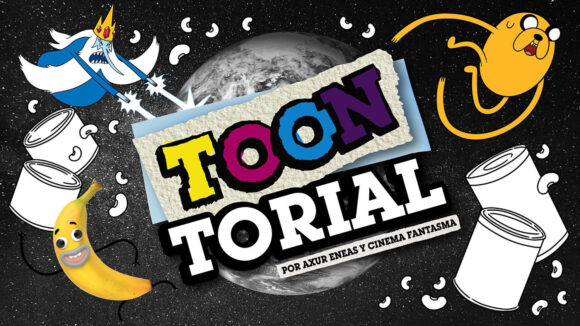 Eneas, who has a background in comics, originally came up with the concept for Toontorial as a parody of his own experiences learning how to do basic tasks. “The pitch was [solving] easy problems with absurd solutions,” Eneas tells Cartoon Brew. “My idea came [from], ‘Well, I’m an adult and I still have to go to Youtube [to learn how to do] simple things.’ [When thinking of episode ideas,] I was looking at Wikihow, like what ones are the most popular? How to fix a cell phone is one of the most popular. So I imagined that the secret of cell phone companies is they make it on another planet, so you have to travel to the other planet, and steal a new cell phone.”

The series will cover tutorials for other outlandish situations, such as how to take care of a pet if it happens to be a dinosaur, or how to pack a bag when it’s essential that you bring your battle-axe.

Eneas has a particular fondness for mixed-media animation content, for example Nickelodeon’s Kablam! and Cartoon Network’s The Amazing World of Gumball, and wanted to augment his own 2d animation with other styles. He turned to Roy and Arturo “Vonno” Ambriz of Mexico City-based stop-motion studio Cinema Fantasma, who had already been commissioned by Cartoon Network to produce six stop-motion shorts featuring CN properties. The brothers agreed to provide stop-motion segments as well as some photography and live-action puppetry.

“It’s a lot of fun. What I think is so good about Axur is that he doesn’t think the same way we do. He has a very 2d kind of mind, since he’s a comic book artist. We have to break our heads to figure out what to do, how to adapt his jokes,” says Vonno, referring to a four-second joke featuring a folding battle-axe that took two weeks for the Fantasma team to create.

Continues Vonno: “Every creative challenge that we get is very well received, because that’s what we like. We don’t like to get comfortable, we always like to take it a little bit beyond. Even if it’s hard, it’s very pleasant.”

Eneas’ vision for Toontorial may be demanding, but he’s certainly putting in plenty of work himself. He’s handling script, character design, storyboard, animatics, all the 2d animation, puppet designs, and editing on his own. It stands to reason, therefore, that he favored a simplistic visual style, especially when it came to the design of his main character, who is monochromatic and doesn’t wear clothes. Despite the difficulty, Eneas, who calls himself a control freak, is happy to have so much autonomy.

“I’m the one doing all the 2d,” he says. “In that aspect, it’s my full idea. My producers [at Cartoon Network] see the scripts [and] they tell me, maybe this is too weird or too gruesome, or maybe use this character. They give me ideas, but I have a lot of freedom.”

Earlier this year, Eneas and Fantasma finished production on their pilot, which was financed by the US$7,500 prize from Pitch Me Evolution, and then in May signed a contract with Cartoon Network for a 16-episode first season, with new episodes premiering every two weeks. This came as a surprise to Eneas, who was expecting only 10 episodes.

“That shocked me,” he says. “I [had] to rearrange everything and [come up with] new ideas, but it allows me to see the growth of my show, to see if people are talking, if people are liking it. It’s a really interesting opportunity. I also don’t know how the audience is going to approach it, because it’s a mixture of Youtube shows, like vlogs, and cartoon show tradition. So I’m interested to see if the kids like it.”