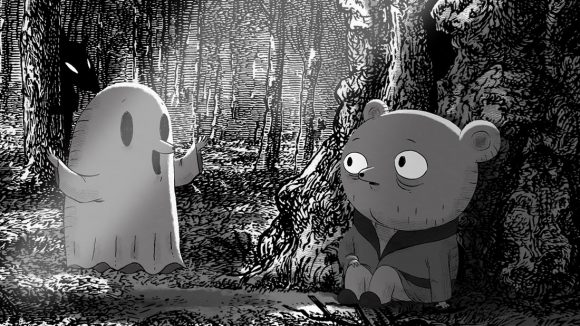 Since his debut short film Birdboy seven years ago, Alberto Vázquez has achieved nominations for all his films at the Goya Awards, Spain’s equivalent of the Oscars.

Birdboy earned him his first Goya, and tonight in Madrid, Vázquez won two more Goyas. The first was for his latest short film Decorado, co-produced by French production company Autour de Minuit and Uniko, a young studio in Spain’s Galicia region that also shares his passion for daring stories. The second was for his feature film, Psychonauts, the Forgotten Children (Psiconautas, los niños olvidados), that Vázquez co-directed with Pedro Rivero. It marks the first time a Spanish animator has won both the feature animation and short animation Goya in the same year.

With a dark sense of humor, Vázquez’s films show an innovative approach to translating the techniques and devices from his original comics to animation. In a video chat with Cartoon Brew from his studio in the Galician city of A Coruña, he revealed the strong influence of his past as a press cartoonist and illustrator. “My artistic background is rooted in the underground comics tradition,” he explained. “That was how I taught myself to embrace my technical limitations, developing my own unique style and growing as an artist.”

Despite using just pen, ink, and a simple color palette, Vázquez creates entire worlds with just a few drawings. But he came to a creative crossroads where comics met animation. “Comics allow endless narrative possibilities that cannot always be easily translated in animation,” he said. “For instance, time can be suspended between two panels, but in animation this isn’t always so easy to represent. Though all my animated films started as comics, I’ve always found it tricky to adapt them.”

Decorado, for instance, is a dark surrealist fable fusing elements of The Truman Show with the pursuit of the meaning of life from Bergman’s The Seventh Seal. It resists usual narrative conventions; an intertitle bearing the film’s name constantly interrupts the different sequences, dividing the linearity of the story into disorienting micro-sketches. It also manages to be an extremely funny black-and-white film with a distinctive artistic style that doesn’t look like anything made before in Spain.

Vazquez reflected, “The original comic that I drew a few years ago, didn’t use most of the ideas that appear in Decorado, like the modular structure, or the use of 19th-century engravings in the style of Gustave Doré as background sets. All these elements arose later during pre-production.” The contrast between the dense line engravings of the background and the unsettling design of the characters are used as a metaphor for the central themes of the short film, the thin lines between truth, appearance, and deception in the age of social media.

Other themes from underground comic culture also appear frequently in his films. For instance, in the feature Psychonauts, Vázquez offers a bleak depiction of violence, sexuality, and teenagers under the influence of drugs. His second short film, Unicorn Blood, doesn’t hide its mockery and derision of the cliches and inherent conservatism of Disney films and commercial television.

Always opting for brave stylistic choices, Vázquez’s films reveal a constant commitment to breaking artistic dogmas. “Nobody should feel any inferiority complex for being self-taught and not having studied animation,” he said. “When I started as a comic book author, I didn’t know where my stories were heading. My first comic was about Spanish immigration in the 1960s, crazy stuff that never thrilled me. Later on I realized I prefer animal characters over humans. And progressively I favored concepts and ideas over embellishment and beautiful drawings, and this is now what guides me.”

Vázquez shows a clear inclination towards short films, which he considers the natural format for animation. “Some ideas only make sense in a short story, like in Decorado,” he said. “I never intended this film to be a feature. In fact, only within the short format is it possible to really experiment with different animation techniques.”

Despite this, Vázquez’s next steps include the adaptation of Unicorn Blood into a feature film titled Unicorn Wars. The film will be a Spanish-French co-production by Uniko, Abano, Autour de Minuit and Schmuby Productions. Vázquez is already in pre-production, and believes that this film will be an important step forward in the evolution of his style. To understand exactly what he refers to, a first look at the project will be presented at Cartoon Movie, held in Bordeaux, France next month.