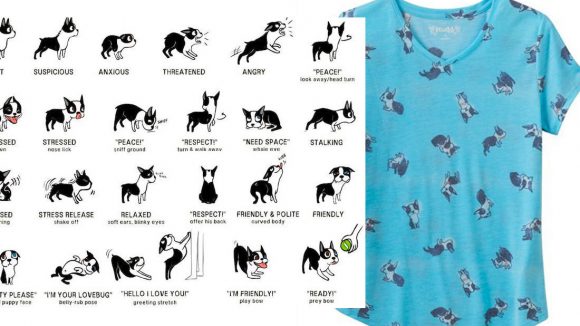 Lili Chin, the co-creator of Warner Bros. Animation’s pioneering Flash-animated TV series ¡Mucha Lucha!, has filed a lawsuit against Kohl’s Corporation, the second-largest department store chain by retail sales in the United States with revenues in excess of $19 billion, alleging copyright infringement related to designs on t-shirts and socks sold and promoted by Kohl’s.

Chin is an established illustrator in addition to an animation artist and is well known for her 2011 “infocomic” poster titled, “Doggie Language,” featuring a black-and-white Boston terrier named Boogie (based on her own dog). She registered the illustrations with the U.S Copyright Office in 2013, a move that now provides her with additional ammunition in her effort to protect her original work.

The poster’s illustrations show Boogie in a series of poses, each pose succinctly described directly beneath, such as “alert,” “relaxed,” and “curious.” The poster became a viral sensation, featured on countless websites and blogs, as well as discussed on international television shows.

Earlier this year, Chin discovered that Kohl’s was promoting and selling t-shirts and socks with designs that feature near-exact replicas of Boogie the Boston terrier as featured on “Doggie Language.” After sending numerous letters to Kohl’s alerting them to her copyright in the designs, all without response from the company, Chin decided to take action.

The complaint, filed by Chin’s attorneys in federal court in the Southern District of New York, included remarkable side-by-side comparisons between Chin’s original Boogie drawings and the designs on the Kohl’s products. As the complaint asserts persuasively, the designer of the Kohl’s products likely traced over Chin’s poster to create the designs; the proportions are virtually identical, and only minor differences distinguish the designs.

Chin told Cartoon Brew that after the success of ¡Mucha Lucha! (which ran for three seasons), a number of other projects stalled, and she turned to illustration, which had been a creative outlet even while she produced television shows. Demand for her work grew—especially for what she calls her “dog art”—and she found the work much more liberating than producing studio television. As she puts it, “I define my content, and in the case of commissioned work, I am making only two people happy with each project: my client and myself. This feels more fulfilling than what I experienced working in animation: making huge creative compromises, and always trying to make different groups of people happy.”

Of course, Kohl’s would likely never steal work from a work like ¡Mucha Lucha!, which was produced by Warner Bros. and thereby protected by that major conglomerate’s army of lawyers. Independent artists, in contrast, must protect original work on their own, often with very limited resources and little knowledge of the protections the law provides. Upon learning of the infringement of her work by one of America’s largest department store chains, Chin, too, hesitated, wary of taking on such a battle. In the end, she took the plunge.

In her lawsuit, Chin seeks damages as well as Kohl’s profits from selling the shirts and socks, as well as attorneys’ fees. And because she registered “Doggie Language” with the U.S. Copyright Office, she may now choose to pursue statutory damages.

Statutory damages negate the need for Chin to prove actual damages, an expensive chore that often requires testimony from experts in addition to other evidence. Instead, where infringement has been “willful”—that is, if Kohl’s knew it was committing copyright infringement, but did so anyway, for example—then the law provides for statutory damages up to $150,000, at the judge’s discretion, in addition to attorneys’ fees.

Chin is being represented by Kushnirsky Gerber PLLC. Kohl’s has yet to respond to Chin’s complaint.

Chin’s complaint against Kohl’s can be read here.