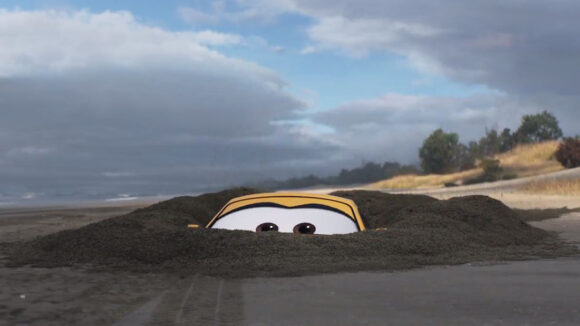 The Cars franchise might mark the nadir of Pixar as a creative enterprise, but graphically, the company still has some surprises up its sleeves, as evidenced by the new Cars 3 trailer released today:

Pixar has been steadily creeping toward a photoreal approach, most recently seen in projects like Piper and The Good Dinosaur. Not necessarily the studio’s character animation, which is still recognizably cartoon, but environments and atmosphere have pushed realism further than most other studios.

The contrast between cartoon and naturalism works to powerful effect in this trailer. The muted palette of the environments allows the cars in front to ‘pop’ (see images below), creating a different effect from earlier Cars films where the natural environments felt as artificial as the cars. Much has been made of the more serious emotional tone of this latest installment, but what hasn’t been discussed is how the shift toward naturalism in the graphics plays a role in heightening the emotions.

Everything visually in this trailer is peak cg craftmanship: the atmospheric effects, lighting, realistic use of camera. There are moments where it really feels like we’re watching cartoon characters placed into our world — and ultimately, I assume, the goal is to make an entire film that achieves such an effect. There’s some particularly impressive racing shots towards the end of this trailer where the cars are drifting in and out of the shadows, and I don’t recall another fully-animated film that’s used this kind of lighting in a fast-moving action scene.

I’m looking forward to learning more about the technical accomplishments of this film in the coming months. Disney and Pixar will Cars 3 in U.S. theaters on June 16. The film is directed by Brian Fee (a board artist on the first two Cars movies).