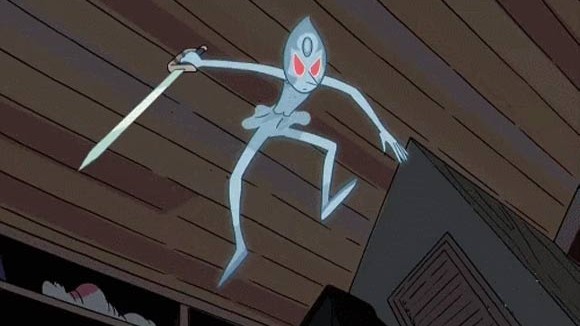 It’s been a few weeks but the last few times in Beach City we witnessed a lot of growth in the series. Steven had an anger revelation after he hung with the cool kids and really showcased the father-son relationship thanks to little Onion. Now we’re back and Steven Universe went and explored the maternal dynamic within their group after Pearl took a blade through the chest.

Before we get into the meat of the episode, let’s touch on the side dish—the anime and the horror. It’s not news to viewers that Steven is your typical kid who likes toys, arcades, and sweet treats. So it wasn’t surprising to learn that he was a Kung-Fu fan, which done in a cartoon makes it look like anime. The Gems and Steven watch Lonely Blade as a little family, and you can tell in an instant what kind of movie they were watching. While the Universe team didn’t overdo the animation on the anime, you could tell what they were going for without hearing the accents. Also, it seemed like they played around with a little manga throughout when Steven would make these faces that resembled Shin-chan, in which your lower chin takes over. You know the one.

The horror elements came in small spurts toward the end when hologram Pearl was draped in a sheet, clearly a ghostlike figure. There was also the eerie tone of the rainy night matched with the sword-wielding psychopath hologram. So was it too much for one episode—anime and horror?

While you stir over that, we’ll move on to the main course. It was established early on that Pearl’s place in their modern family was as the mother figure. So it was weird to see Steven trying to not replace her, but use that hologram in her place while she regenerated. Of course that didn’t last long, and Steven then reiterated Pearl’s most appealing characteristics in a fit of rage. Traits like being smart and always making sure he was safe, traits that we’ve already seen displayed in earlier episodes.

Other than Steven’s strong feeling of guilt after he distracted her and got her stabbed, Pearl’s role as the mother was driven home even more implicitly when she returned after her two-week regeneration period. The house was a mess, her youngest was acting like she’d been gone a lifetime, and the other two were acting like they hadn’t been up to no good—pretty much typical to any scene in any household when a mom comes home.

Speaking of those other two, Amethyst and Garnet didn’t have a whole lot going on this week, but they managed to sneak in some sitcom comedy with their subplot of Amethyst eating a cloud and ballooning into the sky. Not much characterization, but really the source of laughter this time around for Universe.