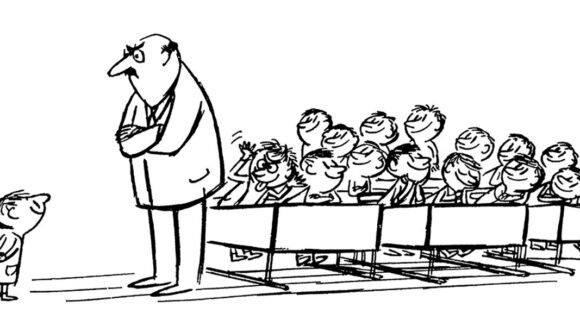 Jean-Jacques Sempé, the iconic French illustrator and cartoonist best known for his wispy and intricately detailed drawings of French life, as well as having drawn more than 100 New Yorker covers, has died.

Sempé’s death was announced by his wife Martine Gossieaux Sempé through the Agence France-Presse. In the announcement, his biographer Marc Lecarpentier explained, “The cartoonist Jean-Jacques Sempé died peacefully Thursday evening, 11 August, 2022, in his 89th year, at his holiday residence, surrounded by his wife and his close friends.”

Sempé was born August 17, 1932, in the suburbs of Bordeaux and forced into the working world at a young age after being expelled from school. Early jobs included selling tooth powder door-to-door and bicycle wine delivery. Unable to secure steady work, he lied about his age and enrolled in the French military in 1950. But army life wasn’t for Sempé and his tenure there was short lived.

In the late 1950s Sempé began collaborating with René Goscinny, a creative partnership that would continue for years and result in the children’s book series Le Petit Nicolas (Little Nicholas), first published in 1959. Little Nicholas presents a nostalgic version of childhood in postwar France.

The first book was popular enough that, despite never having intended to create a series, Sempé and Goscinny went on to create four sequels. Hutchinson & Co. began publishing an English version of the books in 1961, and Little Nicholas quickly found an audience abroad. Today, more than 15 million copies have been sold.

I have always been a very good observer. But hanging out with Sempé was as if I had sharpened my eyes and ears. He taught me this, for example: the conversation that one holds at a restaurant table and which seems normal to you becomes an inexhaustible source of humor as soon as you move away. This discreet distance is noticeable in each of his drawings and which, compared to the anecdote, takes on a significant and derisory dimension.

In 1978, after pitching his work to The New Yorker while vacationing in the city, Sempé started a decades-long relationship with the American magazine. Over the next several decades, he would publish more than 100 covers for the magazine, bringing him broader recognition in the United States.

In the late 2000s, thirty years after Goscinny’s death in 1977, his daughter Anne made the decision to publish a group of ten, previously unreleased Little Nicholas stories. Sempé, who didn’t know of the stories’ existence before then, returned to illustrate and continued a working relationship with the younger Goscinny.

Little Nicholas was adapted as two live-action feature films in 2009 and 2014, as well as a 2009 animated tv series. Just this year, a new adaptation, Little Nicholas – Happy as Can Be, premiered at Cannes before winning the Cristal for best feature at Annecy. Sempé is credited as a graphic designer on the latest film, which was adapted with Anne Goscinny and directed by Amandine Fredon and Benjamin Massoubre. After the news of Sempé’s death broke, Goscinny posted a touching photo and message on Facebook:

In your eyes Jean-Jacques I saw my father smiling…

The respect that Sempé commands as a visual artist in France can be seen in the tributes that have been given, including the front page of the Libération newspaper:

Jazz, tender irony, the delicacy of intelligence. From Petit Nicolas, to Monsieur Lambert, to the walkers of Saint-Germain-des-Prés, Jean-Jacques Sempé had the elegance of always remaining light without anything escaping him. We cannot forget Him. His gaze and his pencil will be sorely missed. 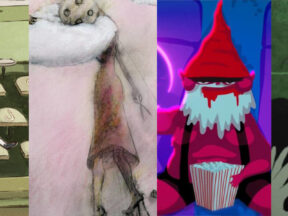 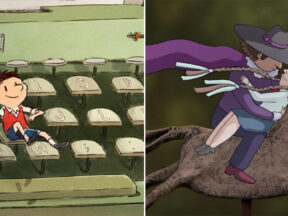