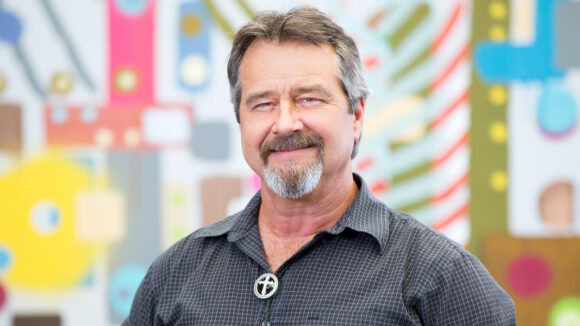 On September 23, animator and educator Troy Gustafson passed away aged 59. He had suffered from leukemia.

Gustafson worked as an animator, mostly on 2d effects, on many key features of the Disney Renaissance, including The Lion King, Mulan, Lilo & Stitch, Pocahontas, and The Hunchback of Notre Dame. Since 2007 he had taught 2d animation at the Savannah College of Art and Design, where his students included Samantha Duckworth, who graduated in 2015.

Duckworth now works as a 2d animator, technical director, and designer for tv and games, specialized in 2d effects animation, for studios including Rooster Teeth and Double Stallion Games, as well as on projects for clients including Riot Games, Nickelodeon, and HBO. Below, Duckworth reflects on lessons learned from studying with Gustafson …

A few weeks ago I was devastated to wake up to the news of Troy Gustafson’s passing. You never expect to find out one of your closest friends passed away via a text message, until it happens.

Troy is gone. The animation industry has lost a legend. And I, and countless others who were lucky enough to know him, have lost a friend.

Troy Gustafson was not just the animator who inspired me to become an animator, nor just my professor and later mentor. Troy was one of my closest friends, and for that blessing I feel endlessly lucky.

To Troy, all that ever mattered was knowing the people in his life were happy. He never asked for gifts, never expected all of your time, and never wanted anyone to feel as if they needed to earn his love.

The only times I ever saw him truly upset with a student were the very rare occasions when he learned that one was a bully or inappropriate towards women students. He had no tolerance for bigotry, harassment, or cruelty. He always stressed that we were a crew, and we were there to help each other thrive, not tear each other down. If you were one of his students, he truly loved you, and I can tell you this for a fact, because he told me.

I want to share my own positive memories of him. I urge anyone reading this to seek out all the stories that have been written about him, because, like one of his famous 2d effects assignments, I am but one rock in a very large pond. Troy openly treasured every single day knowing all of us, and in my own grief, I have realized just how much we all treasured him as well.

One snow day as a junior in high school, when I was thinking about becoming a pediatrician or a psychiatrist, I watched two Disney movies Troy had worked on: Brother Bear and Mulan. For the first time I was noticing all these big, incredible 2d effects animation shots, and it hit me at that moment: people do this for a job. This is a job I can do. I did not know the animator behind the scenes, but he changed my life that day. I started taking art classes at 16, far later than many of my peers, and I worked hard to build a portfolio.

I was accepted into all of the colleges and animation programs I applied to. Without knowing who Troy even was yet, I chose to attend SCAD. At the start of sophomore year I started taking his class in principles of animation, but it was not until I stepped into his classroom that I realized just who he was.

In our very first class, he made it clear that he was going to kick all of our butts, and that the industry we were heading toward was extremely high-standard and competitive, but that he would do all he could to help us succeed in it. I rushed back to my dorm after class to tell my parents how absolutely terrified yet excited I was, and how much of a cowboy he was, hailing from the Midwest with his hat and boots.

After our third assignment, my most treasured memory in life occurred. After critique, while I was waiting for the bus and Troy was on one of his signature smoke breaks, he whistled for me to come over. He told me I was one of the most professional students he had ever had and that I reminded him of his younger self. He asked if I would be interested in him becoming my mentor. He wanted to train me like he had been trained at Disney.

I accepted without hesitation. I had never been so happy in my life, and it’s the moment I keep with me for when I need to cheer myself up, or whenever I doubt myself. He had told me that it was me who inspired him now. They say never meet your heroes, but I am so glad I met mine.

As a professor Troy held us all to such a high standard, and yet he always gave every student the option of a redo. He wanted to foster an environment where we were challenged to do our best, but could also learn and grow without fear of failure. He also pushed these redos because he was always concerned with people’s scholarships and their ability to stay in school.

But he was also concerned with our mental and physical health. He explained on the very first day of class that if we ever had something going on in life, if we told him as soon as possible, he would do what he could to make adjustments for us in the fairest way possible, privately. Out of fear of having an absence on our record, many of us would drag ourselves to class even if we were so sick we could hardly move. Troy would always immediately tell us to go home and get some rest, and that there would be no absence marked off.

Troy was so perceptive. In my sophomore year, he could see I was depressed, so he told me to take a walk with him, even though he usually rushed home in the afternoons to get back with his family and horses. He told me how at Disney, many of his coworkers had depression, anxiety, or some other mental illness, or were going through really hard times. He wanted me to know that I was not alone.

I have so many great memories with him. One time I greeted him and fellow SCAD professor John Webber, and Troy held up his hand for a high five. I, being over a foot shorter than him, did not notice the gesture, so he immediately flipped me off with a mock-furious face, until we were all laughing.

We had so many inside jokes. Some students and I came up with a joke project we were going to collaborate on one day called “Water Fire Smoke Horse,” the joke being that Troy would either be very impressed with us or, more likely, would cringe at our overzealousness. I later learned Troy was planning on making Water Fire Smoke Horse an assignment for a class.

Another time, my roommate Cor Young and I were both joking around about how, since 2d animation frames were measured in fields, we should organize an animation department field day. Since we always worked in 10 Field, we could call it the 10-Field Games, and we could make it Team Webber vs. Team Troy, since they were the two 2d animation professors at the time; students would split performatively into mock teams.

The event immediately went viral, and people began donating money for us to buy inflatable sumo suits for Troy and Webber to wrestle in as the grand finale. The actual games were an amazing success. So many students came out for the multiple field day events, and Troy will live forever in the many videos and memes of him wrestling John in those sumo suits, or fighting him in a duel with foam costume swords.

Troy wrote a long post thanking us for giving him one of the happiest days of his life. It has moved me to see photos and videos from those games used in the majority of memorial posts about him from students I attended school with.

One final goofy memory I have of Troy is of a day in effects class, where he was doing one of his demos. His classes were always in traditional, hand-drawn, paper-and-pencil animation, so we all stood behind him as he animated. I was standing right behind him with a latte that morning, exhausted from little sleep, and at some point I dropped my coffee all over his animation paper. I was mortified, and awaited the well-deserved anger and lecture.

It never came. Instead Troy stopped, turned around to look at me, blinked a few times as if to say, “That really just happened, huh?”, and then turned back to his demo. He never brought it up again. He was a big believer in extending grace towards honest mistakes. If anything, he could often find the humor in it.

I learned a lot from him about how to be a better person, and how to be strong and love life no matter what it throws at us. In our last conversations, he made sure to let me know that he was still so immensely proud of me and how he loved me like a father. I’m so thankful for that, yet so devastated that I can’t thank him and hear his voice just one more time, or get one more hug from him. Sending one final goodbye text to him was one of the hardest things I’ve ever had to do.

In a recent conversation with him, I joked that I needed to get a real cowboy hat and boots now that I lived in Texas, even though I would be a poser from Connecticut. He told me that birth doesn’t make the cowboy: the cowboy makes themself. I said that maybe one day I would take up the mantle and become the intimidating professor who deep down was a big softball. He told me that he would like that a lot.

I’m now the lead effects animator on a major project for a major studio and client, and I would never have got here without his teaching and support.

Fly high Troy Gustafson, Disney effects supervisor, cowboy, professor, and friend. You were one of the best people God, the universe, fate, or chance could have given to this earth. You touched so many lives, and we all miss you so much. You made my life a lot more magical and you will always hold one of the most special places in my heart. I will work my hardest to do even a fraction of the monumental work you did for other people and for the arts.

See you, space cowboy. I look forward to showing you all the art I will make one day, and reading the library’s worth of notes you’ll have waiting for me.