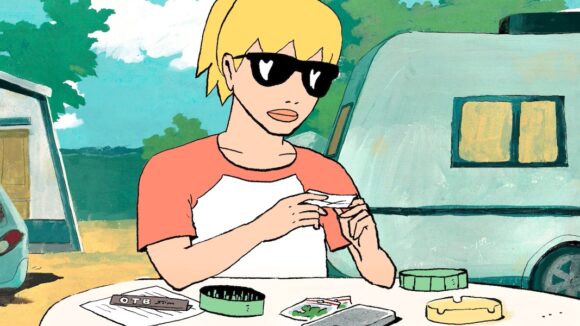 In France, weed dealers can be found anywhere, but are never heard from. The trade is as ubiquitous as it is fiercely prosecuted: France is one of Europe’s biggest consumers of the drug, yet possession and sale can be punished by ten years in prison and a €7.5 (USD$8.8) million fine. For dealers, discreetness is key.

Cannabiz sets out to explore this black market, with all its risks and hypocrisies. The animated documentary series, which is in development, is built around rare interviews with small-scale dealers in the country, who explain how they came to sell cannabis and how they go about it.

Following the project’s presentation at this week’s Cartoon Forum, we are exclusively premiering the pilot. It focuses on Nina, who sells to affluent communities on the Mediterranean coast:

The series consists of 10 x 5 min episodes, each of which is a standalone portrait of one dealer. They come in all stripes: city-dwellers and farmers, male and female, young and old, part-time and full-time. The dialogue is closely based on conversations that writer-director Victorien Tardif conducted with his subjects, but has been re-recorded by actors to maintain anonymity.

This is something the use of animation also helps to achieve. As Tardif explains:

Anxious to preserve the anonymity of the people I met, actors re-recorded their testimonies, to avoid broadcasting their own voices. Animation is another way of getting to know them, without putting them in danger.

The choice of animation also meets my intention to humanize the dealers. Oscar Aubry and Mickael Dupré [who are directing alongside Tardif] took care of drawing endearing, moving, even funny characters. Our goal is not to promote cannabis, but to get to know dealers’ realities though sensitive portraits. We will have won our bet if the spectator says to himself, “These people are outlaws but they are perhaps not so different from me?”

Cannabiz is produced by Christian Pfohl from Lardux Films and co-produced by Emmanuel Chevilliat of Neos Films. They are looking for a partnership with an international platform or French broadcaster.