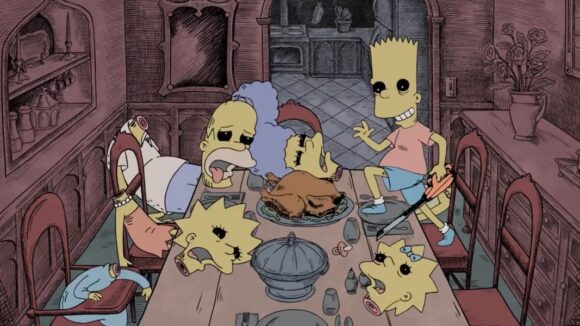 The new Simpsons “Treehouse of Horror” special — the 32nd, if you’ve lost count — will contain a segment inspired by Edward Gorey, the writer-illustrator renowned for his whimsically macabre books. The episode airs on Fox on Sunday; in the meantime, a sneak peak has been released:

The clip shows Bart and others getting up to the kind of grisly antics familiar from Gorey’s works, as well as from past “Treehouse of Horror” episodes. The style parodies the artist’s, from the dense hatching to the Vincent Price-like narrator’s rhyming couplets.

The main reference point here appears to be the PBS anthology series Mystery! (1980-2006), which was presented for a time by Price. The title sequences were designed by Gorey and directed by Derek Lamb:

“Treehouse of Horror” specials consist of segments that generally parody well-known cultural works. The upcoming episode will feature five segments instead of the usual three. Films referenced in other segments will include Bambi, The Ring, A Nightmare on Elm Street, and Parasite.